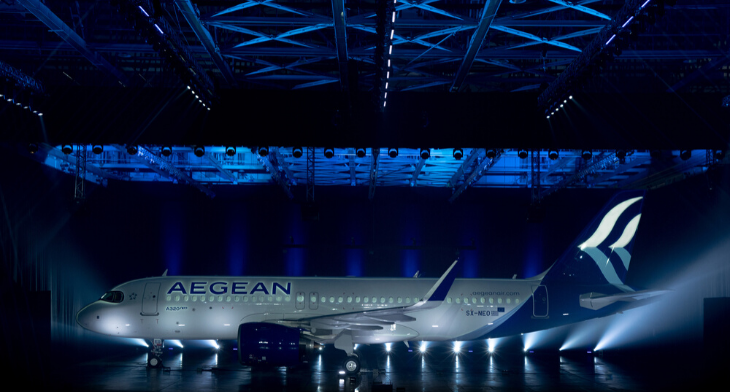 GTF engines will provide the airline with the ability to reach further destinations which will benefit both passengers and Greek tourism, AEGEAN suggested. The engine has also demonstrated a reduction in nitrogen oxide emissions by 50% and fuel burn decreased by 16%, creating a more environmentally beneficial aircraft.

The airline received the first aircraft in December 2019, part of an order for a minimum of 46 aircraft expected to be received by 2025. Until July 2020, AEGEAN is set to receive a total of six new aircraft reaching a fleet of 65 aircraft, adding 1.5 million seats to the network through the purchase.

Along with the presentation of the new aircraft, AEGEAN revealed its new livery and branding which draws inspiration from the Greek landscape, architecture and heritage. Dimitris Gerogiannis, CEO of AEGEAN said, “The new livery represents a new AEGEAN and a platform to expand and refresh services for a better customer experience.”

The airline currently flies to 155 destinations in 44 countries. AEGEAN plans to use the A320neos on short to medium-haul flights from their base in Athens. The aircraft will commence service from 14 February across Europe, with the hope that more destinations will be within reach as more aircraft arrive.