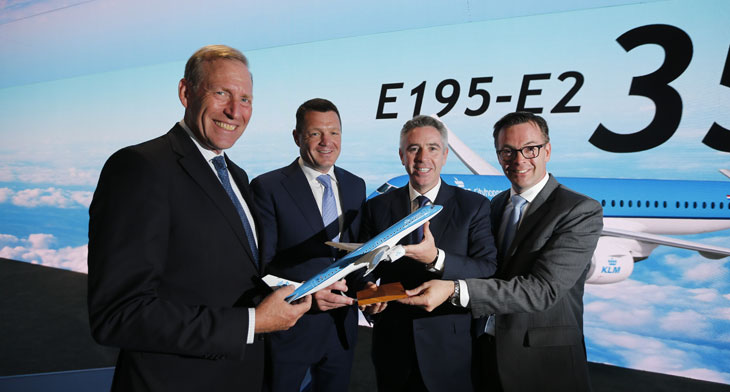 Embraer has announced KLM Cityhopper’s intention to purchase up to 35 E195-E2 jets, 15 firm orders with purchase rights for a further 20 aircraft of the same model.

The intention still requires a Purchase Agreement, but has a value of US$2.48 billion based on current list prices.

“Embraer has been a key partner for KLM and Cityhopper over the past ten years. Our customers appreciate the E190 and E175’s,” said KLM president and CEO Pieter Elbers. “The E2 would be a welcome addition to the KLM fleet, giving us greater capacity flexibility and help to manage down costs.”

Elbers added that the E195-E2 also supports the airline’s sustainability goals with lower levels of noise and emissions.

KLM Cityhopper began replacing its fleet of Fokker aircraft with E-Jets in 2008, the airline’s all-Embraer fleet currently has 49 E-Jets, the largest E-Jet fleet in Europe – 32 E190s and 17 E175s.

John Slattery, president and CEO Embraer Commercial Aviation said that as KLM is “already the largest Embraer operator in Europe”, adding it to the E2 family of operators “would be a huge vote of confidence in Embraer, our after sales care, and the E2 programme.”

“The aircraft uses 30% less fuel per seat compared to KLM Cityhopper’s current E190s. And in terms of aircraft noise, the aircraft is the quietest in its class both internally for passengers and externally by a significant margin,” Slattery added.

Embraer suggested that the economic and environmental performance of the E195-E2 makes it “the ideal aircraft” for growing KLM’s European business and “supporting their hub-and-spoke operation, complementing the mainline fleet.”

The order will be added to Embraer’s backlog once a firm contract is completed.