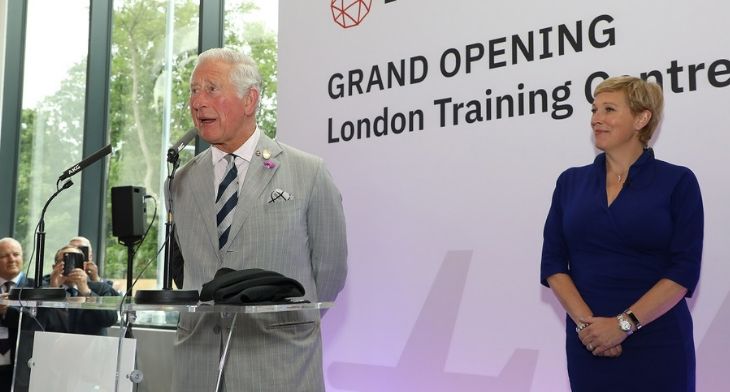 The new training centre was officially opened by His Royal Highness The Prince of Wales, along with the UK Aviation Minister Baroness Vere.

The facility will also design, develop and build the company’s leading RealitySeven Full Flight Simulator (FFS) with its new production facility, which has a combined volume of more than 150,000 square feet with capability to manufacture over 30 FFS a year. The production facility has also been built with the flexibility to expand training facilities into the building, depending on FFS demand.

The training centre already has 15 international airlines training pilots at the site, and it will also support the company’s Airline Academy cadet training programmes.

Alan Crawford, president, L3Harris Commercial Aviation Solutions, said: “Our investment in this facility reflects our confidence in growth opportunities in the U.K. and the aviation industry, illustrated clearly by the demand for new airline pilots across the world.”

“This training centre will boost the local economy, helping our aviation sector to continue to cement its place as one of the world’s very best,” said Parliamentary Under Secretary of State for Transport, Baroness Vere of Norbiton, “As we seek to build a fairer society, improving access to pilot training goes hand in hand with our work to increase diversity and female representation across the industry.” As the company aims to reach out to a wider talent pool, Jo Hjalmas, director of UK Airline Academy, L3Harris Commercial Training Solutions, discussed L3Harris’ Pilot Pathways and announced the first two candidates to be awarded sponsorship under the Female Scholarship Scheme.

Improving diversity was a key theme of the event, with His Royal Highness The Prince of Wales commenting on the “effective scholarship scheme” at L3 and Baroness Vere also commenting that she was pleased to see the UK preparing for the challenge of meeting the need for pilots, highlighting the government’s Aviation 2050 strategy which is to be published later this year and recognising efforts to improve diversity; “We have to make sure we are fishing from the whole pond, not just a certain part of the pond, because good pilots come from everywhere.”

Speakers identified some of the key challenges to improving pilot diversity with the cost of training, and the need to encourage more women into aviation (currently women are just 6% of the pilot workforce globally) top of the agenda. The roundtable speakers particularly highlighted the need to raise awareness of the role of commercial airline pilots as a career option for women, creating a welcoming environment for women in aviation, challenging misconceptions and stereotypes and attracting the younger generations to the career.

David Morgan, COO easyJet spoke about the airline’s Amy Johnson initiative, launched in 2015 to promote aviation as a career for young women and which set the target of increasing the intake of new entrant female pilots into easyJet to 20% by 2020. In 2015 only 6% of easyJet’s new entrant pilots were female, but last year the airline achieved 15%. Morgan explained that this year they are expecting to reach 17-18% and are hoping to meet their target for 2020.

Image: L3Harris Technologies. His Royal Highness The Prince of Wales speaking on stage with Baroness Vere.