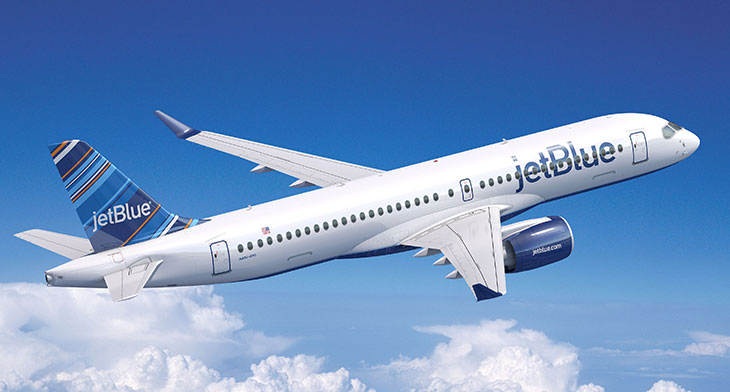 Airbus has confirmed two separate orders for a total of 120 A220-300 aircraft to low-fare carrier JetBlue and fellow budget US start-up airline ‘Moxy’.

The deals have a direct connection, with the new airline project led by David Neeleman, the founder of JetBlue. The latter has placed a firm order for 60 A220-300s, as has Moxy, which remains a ‘code name’ for now.

Both orders were completed last week. Airbus will produce all of the A220-300s for both orders at its new US assembly facility in Mobile, Alabama, construction of which will begin later this month directly adjacent to the existing A320 assembly facility.

Robin Hayes, CEO at JetBlue, said: “As we approach our 20th anniversary, the impressive range and economics of the highly efficient A220, combined with the outstanding performance of our existing fleet of Airbus A321 and restyled A320 aircraft, will help ensure we deliver the best onboard experience to customers and meet our long-term financial targets as we continue disciplined growth into the future.”

The carrier’s existing Airbus fleet includes 193 A320 and A321ceo single-aisle aircraft in operation, with a further 85 A321neos on order.

Moxy, the nascent LCC project which has been floating around in the background for the last couple of years, has now formally broken cover. According to Neeleman: “The A220-300 is the right airplane for a new airline that will be focused on passenger service and satisfaction. With a low cost of operation and spacious cabin, the A220 will allow us to provide passengers with lower fares and a high quality, comfortable flying experience. The A220’s ability to operate profitably in thin, underserved markets across a broad spectrum of ranges is unique.” Christian Scherer, chief commercial officer at Airbus and the former CEO at ATR, commented: “Moxy has its sights set on the future, so I can’t think of a better aircraft to put into their fleet than the A220. We believe the A220 really is the future of this segment of the market.”