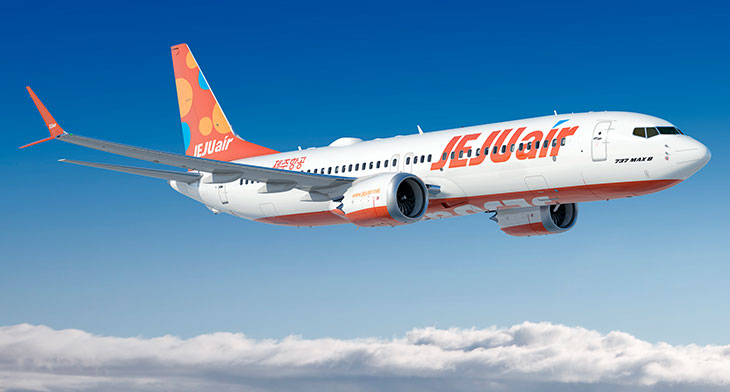 South Korea’s Jeju Air has demonstrated a major show of faith in Boeing’s MAX 8, placing a firm order for 40 B737 MAX 8s with options for another 10.

The order is the largest ever by a Korean low-fare carrier, and is valued at up to US$5.9 billion at list price. Seok-Joo Lee, president and CEO of the airline, said: “With Korea’s growing commercial aviation market, we are excited to take the next step in expanding our business with the 737 MAX, a world-class airplane that will allow us to improve our operation and continue to provide a safe and enjoyable experience for our passengers. The 737 MAX 8 and its superior performance and economics make it an ideal airplane to implement our growth strategy as we look to expand beyond Asia in the coming years.”

Jeju Air is based on South Korea’s Jeju Island and began operations in 2005 as the country’s first LCC. It currently has a fleet of nearly 40 Next-Generation B737-800s. Over the past five years it has achieved 25% annual sales growth and recorded 17 consecutive profitable quarters. It serves 60 domestic and international routes with approximately 200 daily flights.

“We are extremely proud that Jeju Air has become a leader in the vibrant LCC market by flying the Boeing 737. And we are delighted that the airline has chosen to build their future fleet with this major order for the 737 MAX,” said Ihssane Mounir, senior vice-president of commercial sales and marketing for The Boeing Company.

Boeing Global Services will also provide Jeju with digital tools to help reduce its operating costs, including the Fuel Dashboard Programme, which allows operators to look across their fleet and identify areas where they can optimize their fuel spending.

Boeing is still in the midst of the investigation into the crash of a MAX 8 operated by Indonesian carrier Lion Air. A preliminary report is expected to be released by the end of November. Flight JT610 crashed on 29 October, killing 189 passengers and crew, shortly after take-off from Jakarta International Airport. It was the first major accident involving a MAX aircraft.

The US Federal Aviation Administration has warned airlines that erroneous inputs from the anti-stall system’s sensors could lead the aircraft to automatically pitch its nose down even when autopilot is turned off, making it difficult to control.