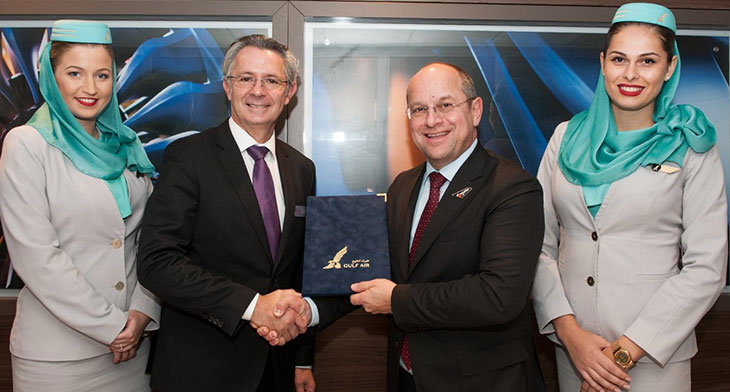 Gulf Air and CFM International have signed a long-term agreement for the maintenance of the airline’s LEAP-1A engines, in a deal valued at just over US$1 billion at list price, with CFM also announcing a further $1 billion LEAP-1A deal with SaudiGulf Airlines.

Under the terms of the 10-year Rate per Flight Hour agreement for Gulf Air, covering a total of 65 LEAP-1A engines the airline ordered last year, CFM will provide maintenance support for its fleet on a dollar per flight hour basis.

The Bahrain flag carrier has been a CFM customer since 1992 and currently operates a fleet of 16 Airbus A320ceo aircraft powered by CFM56-5B engines. It began commercial operations using the A320neo powered by LEAP-1A engines in August this year.

“We are excited to expand our long-term partnership with CFM, which has been a key partner in our development for more than 25 years,” said Krešimir Kucko, CEO of Gulf Air. We are extremely pleased with the LEAP engine we recently introduced into our fleet. This engine will allow us to continue to improve our commercial offer, while optimising our operating costs.”

“We are very honoured by the confidence Gulf Air has placed in CFM,” said Gaël Meheust, CFM president and CEO. “This company is a major player in the growth of air transport in the Middle East and we believe that the introduction of the LEAP engine will allow them to go even further in terms of efficiency. “

Gulf Air began operations in 1950 out of its hub at Bahrain International Airport. It has a current 28-strong fleet of both wide- and narrowbody aircraft, with another 39 new Boeing and Airbus aircraft due for delivery.

CFM also announced a further deal valued at more than $1 billion with Al-Qahtani Aviation, parent company of SaudiGulf Airlines, for the purchase of LEAP-1A engines to power 10 firm and 10 option A320neo family aircraft scheduled to begin delivery in 2023. The total value includes the firm engine order and a long-term service agreement.

The airline is also leasing an additional 20 LEAP-powered A320neo aircraft and plans to take its first aircraft in 2020.

To support the entire fleet, including the leased aircraft, the carrier has signed a 12-year Rate per Flight Hour agreement under the terms of which CFM will provide maintenance support on a dollar per flight hour basis.