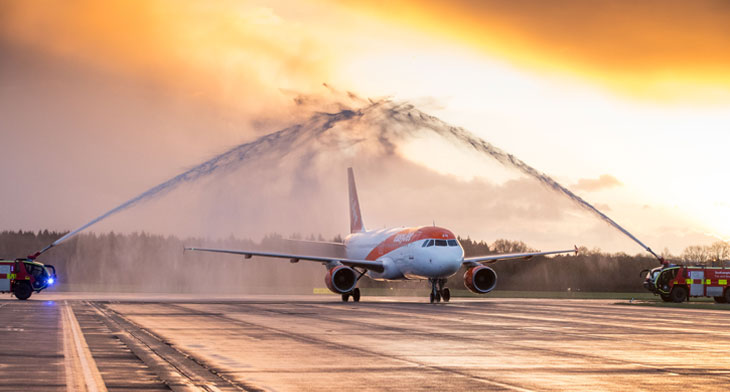 It’s been a week of contrasting fortunes for two European airline stalwarts, with first Flybe and then easyJet announcing their results.

For easyJet, it’s been a pretty stellar financial year, with reported profit before tax soaring to £445 million from £385 million last year, and revenues nearly reaching £6 billion. The European low-fare giant benefitted partially from the collapse of rivals such as Monarch and AirBerlin, as well as the pilot-related travails of its big rival Ryanair.

For Flybe, in the midst of a painful but vital revamp, its financial status is more of a damp squib. Half-year profits for the regional carrier from April to September 2018 fell by 54% to £7.4 million and revenues were down 2.4% to £419.2 million. Not only that, but it’s had to put itself in the shop window for potential buyers, with a formal sale process and talks underway “with a number of strategic operators.” A sale is by no means certain, but a deal may well emerge.

Suitors won’t however include easyJet, as CEO Johan Lundgren said he didn’t have “any interest in this particular topic on Flybe at the moment,” when asked if he would be interested in buying it. Flybe’s current value has been put at around £25 million.

So what’s the outlook for these companies in the European short-haul sector?

easyJet says that “as competitors continue to try to restructure their high cost bases or operate with inadequate financial resources, easyJet is well positioned selectively to strengthen its market positions.”

The total European short-haul market grew by 5.6% year-on-year and by 2.8% in easyJet’s markets, it added, lower than in previous years and reflecting both a rising oil price and the various issues affecting Monarch, Air Berlin, Alitalia, Ryanair and Air France.

However, despite the fuel cost challenges at present (it represented 22% of easyJet’s cost base this year) and slightly lower forecast revenue per seat, it plans to grow capacity by around 10% next year.

Flybe’s CEO, Christine Ourmières-Widener, chose to highlight the “recent softening in growth in the short-haul market, as well as continued headwinds from higher fuel and currency costs. We are responding to this by reviewing every aspect of our business. We remain confident in the vital role that Flybe plays in UK connectivity.”

She and her management team are admirably doing all that they can, but the Northern Hemisphere’s cold season is on its way and it could well be a bleak mid-winter for them. LARA wishes them nothing but success – I was lucky enough to tour its facilities in Exeter earlier this year and it’s a terrific set up with an excellent workforce. So I look forward to hopefully writing at some point about how Flybe has managed to turn things around.

But the contrasting fortunes between these two airlines illustrates how fine the line is between being at the top of your game – or potentially not being in the game at all.