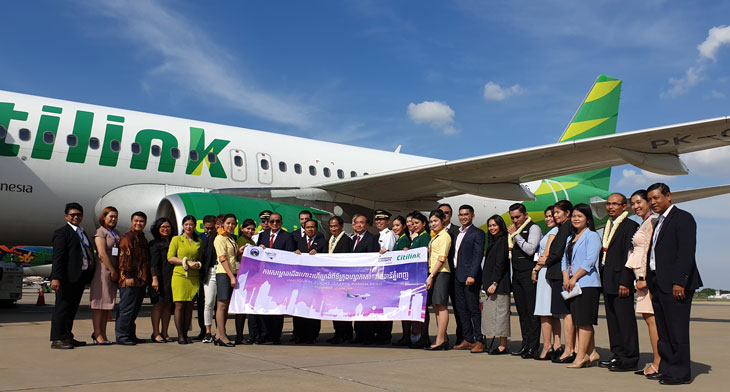 Citilink launches flights between Jakarta and..

The airline will operate thrice-weekly flights operating on Mondays, Wednesdays and Fridays, with a 180-seater Airbus A320 aircraft.

The service is expected to grow air traffic between the two countries, offering direct flights that contribute to reducing travel time and increasing travel options for visitors to/from Indonesia and Cambodia. “We are pleased to launch Citilink’s direct flight from Jakarta to Phnom Penh to connect both capital cities,” said Citilink Indonesia’s vice-president corporate strategy Heriyanto, commenting, “The launch of this new route serves also as a mean to commemorate the 60th year anniversary of Indonesia and Cambodia diplomatic relations.”

Éric Delobel, CEO of Cambodia Airports, the company that operates the Kingdom’s three international airports, commented, “It is a breakthrough to both welcome a new carrier and to open a new route. Specifically, we had looked forward to serving Indonesia and its huge market.

“Recent launches of routes bode well for reaching again traffic heights at Phnom Penh International Airport when the year wraps up. To accommodate the expected growth, we continue investing in the expansion of our facilities and in the further improvement of our operational process while bolstering the quality of service to our customers.”

With the new connection, Cambodia’s network of international airports expands its connectivity to nine out of the 10 ASEAN countries.