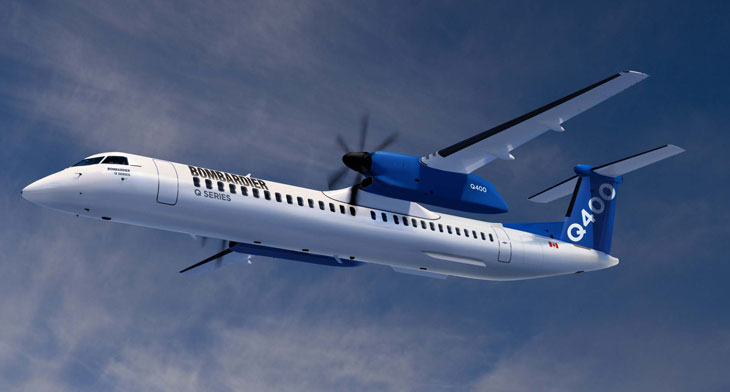 Bombardier has entered definitive agreements to sell its Q Series turboprop programme and its trademark for the de Havilland Dash 8-100, 200 and 300 aircraft to the parent company of Viking Air for US$300 million.

The Canadian manufacturer will retain its CRJ programme to “return it to profitability.” The Q400 Series is being sold to Longview Aviation Capital Corporation (LAC), set up in 2016 to manage a portfolio of long-term investments in the Canadian aerospace industry. That includes Viking Air, the Vancouver-based manufacturer of aircraft including the 19-seat Twin Otter turboprop, another former Bombardier product the rights of which were sold to Viking in 2006.

After handing over ownership of the C Series programme to Airbus last year, the proposed sale – subject to regulatory approvals – to LAC will see Bombardier Commercial Aircraft with just its regional jet series and its business aviation business to focus on. The associated sale of its business aviation training business to CAE, announced at the same time as the Q400 deal, will result in up to 5,000 redundancies over the course of the next 12–18 months.

In more detail, Montreal-based Bombardier stated: “On November 7, 2018, the Corporation entered into a definitive agreement for the sale of the Q Series aircraft programme assets, including aftermarket operations, to a wholly owned subsidiary of Longview Aviation Capital Corp., for gross proceeds of approximately $300 million. The agreement covers all assets and intellectual property and Type Certificates associated with the Dash 8 Series 100, 200 and 300 as well as the Q400 programme operations at the Downsview manufacturing facility in Ontario, Canada.

“The transaction is expected to close by the second half of 2019, subject to customary closing conditions and regulatory approvals. Net proceeds for this transaction are expected at approximately $250 million net of fees, liabilities and normal closing adjustments. “Following the closing of the Airbus partnership on the C Series aircraft programme earlier this year, and the agreement to sell the Q400 programme announced on November 7, 2018, our full attention is turning to the CRJ programme. As we continue to actively participate in the regional aircraft market with our established, scope-compliant aircraft, our focus is on reducing cost and increasing volumes while optimising the aftermarket for the approximately 1,500 CRJs in service around the world today. As we look to return the CRJ to profitability, we will also explore strategic options for the programme.”

No further details on those strategic options were clarified at this time, but may well include eventually bringing onboard a project partner, similar to its C Series arrangement with Airbus.

Bombardier says it made five CRJ and Q400 aircraft deliveries in the third quarter of 2018, while receiving net orders for 11 aircraft. In its Commercial Aircraft segment, EBIT before special items was “near the breakeven point due to the deconsolidation of C Series losses net of the associated equity pick-up,” it stated.

It confirmed the above news at its third quarter results, where it revealed earnings rising 48% year over year to $271 million on revenues of $3.6 billion. The sales are part of the company’s ongoing turnaround plan, said Alain Bellemare, president and CEO at Bombardier Inc. “With today’s announcements we have set in motion the next round of actions necessary to unleash the full potential of the Bombardier portfolio. During the earnings and cash flow building phase of our turnaround, we will continue to be proactive in focusing and streamlining the organisation, and disciplined in the allocation of capital.”

Bombardier has also launched a new enterprise-wide productivity programme to further streamline, lean out and simplify the company. With the heavy aerospace investment phase successfully completed, this will include right-sizing and redeploying its central aerospace engineering team. That will mean key engineering team members being redeployed to the business segments, with the largest group moving to Business Aircraft, it said, to ensure they have all the necessary capabilities for future business jet development programmes.

Further restructuring focused on “optimising production and management processes, flattening management structures and further reducing indirect costs” will collectively result in the loss of approximately 5,000 positions across the organisation over the next 12 to 18 months. This will create annualised savings of approximately $250 million by 2021.

Bombardier’s Aerostructures and Engineering Services segment saw revenues increase by 23% year-on-year, driven by Aerostructures’ position as a key supplier to the Airbus A220 and Global 7500 aircraft growth programmes. An 8.4% EBIT margin before special items for the quarter “reflects the continued ramp-up of the A220 and Global 7500 component production as well as the new contractual relationship with Airbus on the A220,” it said.