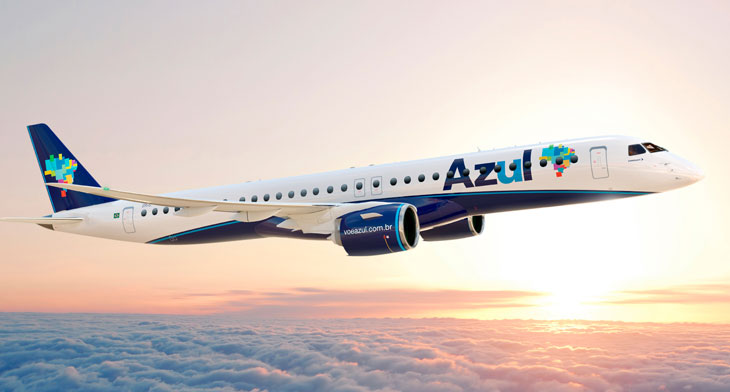 Embraer has announced two deals with airlines in Brazil and the central Pacific, valued at over US$1.6 billion.

The Brazilian manufacturer confirmed the signing of a contract with compatriot Azul Linhas Aéreas Brasileiras of a firm order for a previously announced 21 E195-E2 aircraft. The deal was first unveiled at the Farnborough Airshow in July as a Letter of Intent (LoI).

The contract is valued at $1.4 billion, based on current list prices, and will be included in Embraer’s fourth-quarter backlog for this year. The aircraft are in addition to 30 E195-E2s ordered by Azul in 2015, raising the airline’s total order to 51 E2 aircraft.

Azul will be the launch operator of the E195-E2 when it receives the first one in 2019. The carrier has an operating fleet of 120 aircraft and flies 218 non-stop routes. In the central Pacific region, Air Kiribati also signed a deal with Embraer for four E190-E2s – two firm orders along with purchase rights for another pair. With all the purchase rights exercised, the contract has a value of $243 million, based on current list prices. The order will also be included in Embraer’s Q4 2018 backlog.

The first E190-E2 is scheduled for delivery next year, enabling the republic’s flag carrier to fly longer domestic and international routes than it currently does with its existing turboprop fleet. Air Kiribati will be the launch operator for the aircraft type in the Asia Pacific region (excluding China).

Embraer’s E190-E2 in its ‘Shark’ livery included a stop in Tarawa, the capital of Kiribati, in October. Spanning four time zones and comprised of more than 30 islands, Kiribati is the only country in the world to be in all four hemispheres. With a maximum range of up to 2,850 nautical miles, the E190-E2 will be able to operate over the vast expanse of Kiribati, including from Tarawa directly to Kiritimati (Christmas) Island, one of the most challenging routes in the Pacific. The E190-E2 can seat up to 114 passengers.