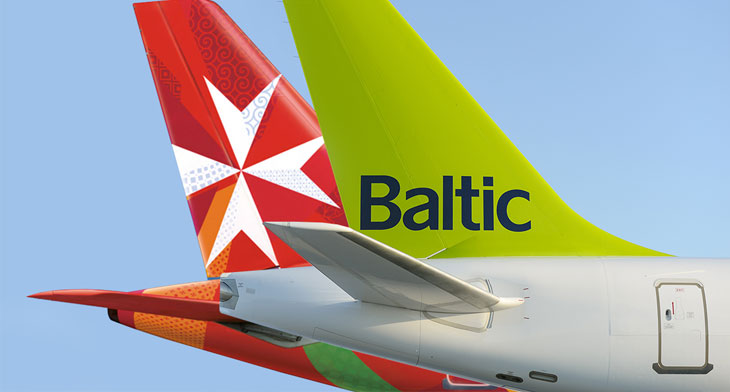 Latvian airline airBaltic and the national airline of the Maltese Islands, Air Malta have formed a codeshare agreement.

This agreement will enable airBaltic passengers to reach Malta every day through European gateways as well as additional destinations served from Malta, and will offer Air Malta passengers better connectivity to the Baltics and Eastern Europe.

“We are delighted to collaborate with Air Malta thus further improving our strong network of codeshare partner airlines that ensures smooth and seamless travel for airBaltic customers,” said Martin Gauss, chief executive officer of airBaltic. “The new codeshare agreement will improve airBaltic services between Malta and the Baltics allowing passengers to connect every day on this route via such common gateways as Vienna, Munich, Brussels, Frankfurt, Amsterdam, London, Geneva, Zurich among others.”

Paul Sies, chief commercial officer at Air Malta called this a milestone for the airline in its growth strategy and widening its network, adding: “We are rapidly changing, transforming our business model to a hybrid carrier whilst rapidly increasing our frequencies on existing routes, we are opening new destinations and adding partnerships to the network.

“This agreement continues to expand and improve our network and adds to our range of codeshare partners with other like-minded quality airlines. Both Air Malta and airBaltic share the same commitment towards their customers and we are excited to work with them for the benefit of our mutual customers.”

Air Malta will place its flight code KM on direct Malta–Riga flights operated by airBaltic as well as connecting flights between Malta and the Baltics, while airBaltic will put its code BT on flights from Riga, Vilnius and Tallinn to Malta as well as to Catania (Italy) via common gateways.

Air Malta announced earlier this year that it will be introducing a new service from 19 January between Catania and Vienna following the bankruptcy and withdrawal of NIKI from the market. The airline said this was a significant step towards the growth strategy and development of a second hub on the Island of Sicily.

Meanwhile, airBaltic is expanding in Tallinn. The airline is to launch new direct services from the Estonian capital to Stockholm and Oslo and base a second aircraft at Tallinn Airport from 28 October 2018. airBaltic will also launch a new direct service from Tallinn to London Gatwick Airport on 27 March 2018.