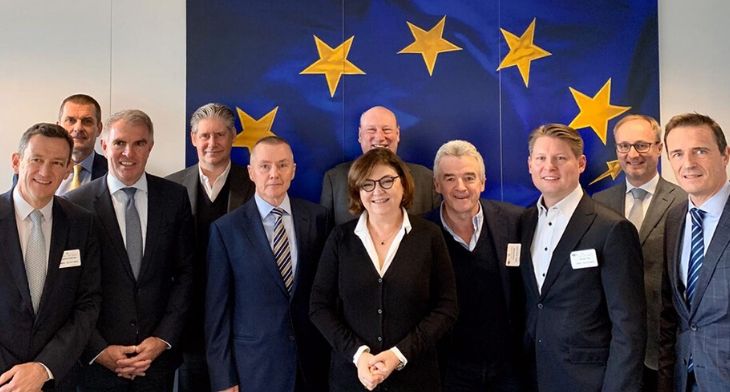 In a meeting with the new EU Transport Commissioner Adina-Iona Valean, members of the Airlines for Europe (A4E) association have laid out their most pressing priorities for the new Commission mandate.

The airline CEOs priorities included; close collaboration with industry on climate change goals; incentives and investments for sustainability investments instead of new taxes on aviation; urgent reform of Europe’s air traffic management system and completion of the Single European Sky initiative; as well as an urgent revision of Regulation 261 on Air Passenger Rights.

To best contribute to the European Commission’s upcoming Green Deal strategy, A4E and other airlines have teamed up with Europe’s airports, manufacturers and air navigation service providers in the development of a cross-sector climate initiative.

Europe’s airlines have reduced their fuel consumption per passenger kilometre by 24% over the last 30 years by flying more fuel-efficient aircraft, the group said, and by making their overall operations more efficient. A4E airlines are investing €170 billion through 2030 to operate the most fuel-efficient, next-generation aircraft.

“The new European Commission has begun its work at a time of enormous challenges, but also tremendous opportunities for both the EU and its aviation industry. A4E airlines stand behind Europe’s ambition to move towards a zero or low-carbon economy,” commented Michael O’Leary, A4E Chairman. “Europe’s airlines take these goals very seriously and we are investing billions to more than contribute our share. We also know that this is an industry challenge which requires an industry solution, and we believe our sustainability roadmap will show us where we can do even more.”

The group suggest the “right combination of policies, incentives and investments” at European and national levels will best support the industry’s decarbonisation efforts.

“It is critical that industry works in close partnership with the EU institutions if we are to be successful in fulfilling Europe’s climate ambitions — whether it be on a dedicated policy for increased sustainable aviation fuel (SAF) production at an economically affordable price, or by implementing the Single European Sky, which would save 10% in CO2 emissions.” said Thomas Reynaert, managing director, Airlines for Europe (A4E).

Reynaert added that aviation taxes “do nothing for the environment. On the contrary, they limit airlines’ ability to invest in new aircraft, innovation and sustainable fuels.”

The association said European airlines have been paying for their carbon emissions since 2012 through the EU carbon trading scheme and from 2021 they will also be part of the UN global offsetting programme CORSIA, which is set to reduce aviation emissions by 2.5 billion tonnes between 2020 and 2035 through €36 billion ($40 billion) investment in carbon reduction projects.

A4E has also recently welcomed a new member in the form of tourism group TUI. Kenton Jarvis, CEO TUI Aviation commented: “We are looking forward to working with A4E on the very important policy issues that all airlines and tourism partners in Europe face.

He added: “Together, we need to do our utmost to support healthy, sustainable and environmentally responsible growth for our industry which connects so many people and cultures.”