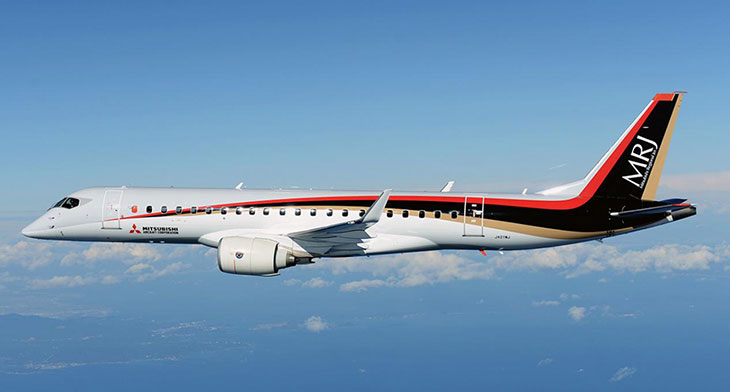 Mitsubishi Heavy Industries is to revamp its much-delayed regional jet project to focus on a smaller model aimed at the US market. They will also drop their own name from the aircraft to reflect a more global vision for the airliner.

Mitsubishi Aircraft plans to offer an outline of the reworked project, now named the Space Jet, in June at the Paris air show. This will involve a major redesign to create a smaller 70-seat-class model, with work to begin later this year. The company also plans to switch to American suppliers for certain parts to cut costs, aiming to make price a major selling point along with fuel efficiency. They are also considering production of the Space Jet to be based in the US.

This marks a major change in the direction for what have been intended as Japan’s first homegrown commercial jet aircraft.

In the US, agreements between pilots and operators include “scope clauses” that cap the number of seats on aircraft serving regional routes at 76. Mitsubishi Heavy Industries started work on the mainstay 90-seat-class model in 2008 amid widespread expectation that these limits would be relaxed. But this now seems unlikely as the industry suffers a pilot shortage. With the prospects looking poor for American sales of the larger model, Mitsubishi has opted to focus on the smaller version to ensure access to the world’s largest market.

Work will continue with the 90-seat-class variant. Mitsubishi Aircraft is in the final stages of securing certification for the type, with deliveries planned for 2020. But if these will be delayed by the shift of focus to the smaller variant, Mitsubishi has not yet stated.

The redesign means that the smaller aircraft is not expected to get its type certification sooner than 2022. So, customers that may switch from the 90-seat to the 70-seat model will have to wait even longer.

Mitsubishi has received 447 orders so far for the larger MRJ. But cancellations have since lowered this figure to 407 and Mitsubishi Aircraft has now stopped accepting any additional orders.