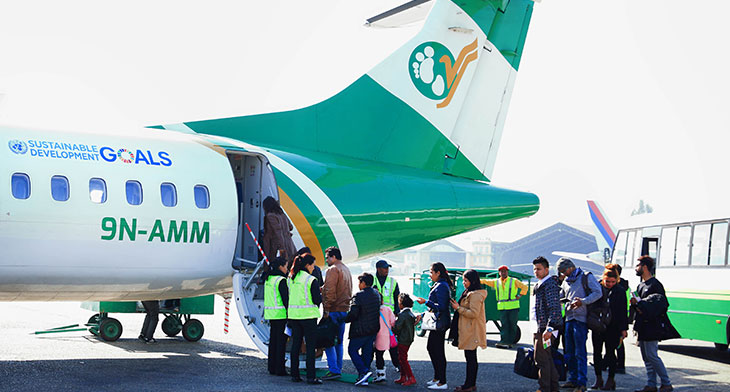 An independent carbon audit process was carried out for the airline, facilitated by the United Nations Development Programme (UNDP) to calculate the airline’s total carbon emissions and also to set plans to reduce and offset them.

The audit revealed that Yeti Airlines produced 19,665 tonnes of CO2 equivalent emissions in 2018 from its entire operations including flights, vehicles and other facilities – the airline said this equals the amount of carbon sequestered (taken up) by approximately 325,165 trees growing over 10 years. The emissions from its flight operations accounts for over 99.9% of its total GHG emissions.

As part of its emission reduction plan, between 2017 and 2018, the airline was able to reduce the CO2 equivalent emissions per flight km by 20% and per passenger by 12% after adopting a more fuel-efficient aircraft fleet. The airline said it achieved lower per-passenger GHG emissions by expanding its fleet of fuel-efficient aircraft, such as the ATR72-500, while gradually phasing out its Jetstream 41 operations.

“Providing the largest network of flight routes in Nepal, Yeti Airlines works tirelessly to raise its standards of customer service whilst working to help protect the environment in which it exists,” said Umesh Chandra Rai, chief executive officer of Yeti Airlines. “We have pledged to demonstrate our leadership in aligning and supporting the Sustainable Development Goals (SDGs) in every opportunity, particularly promoting SDGs no. 5 Gender Equality, no. 13 Climate Action and no 17 Partnership for the Goals.

“This is an exemplary effort to demonstrate how the private sector can help accelerate the achievement of the SDGs. This is also one step forward to helping Nepal fulfill its commitment to Paris Agreement on Climate Change. We hope the airline will continue its good works to remain carbon neutral and inspire others to follow the path in the coming years as well.”

In the past, Yeti Airlines has undertaken environmental and social projects such as the Yeti Green Re-forestation Project, Green Far West Project and the Everest Clean Up campaign.