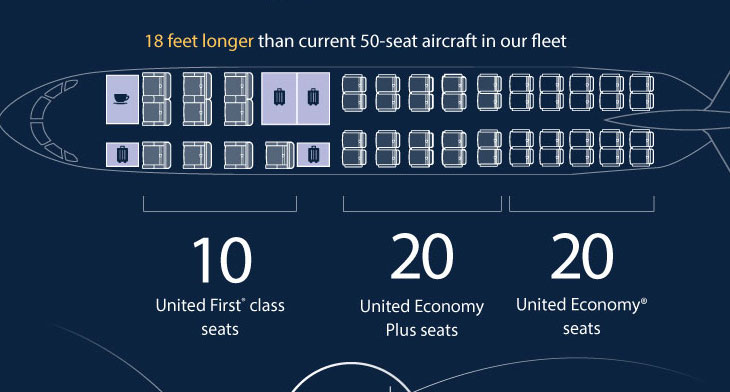 United Airlines is planning to introduce 50 of Bombardier’s new CRJ550 aircraft to its regional fleet and has selected its regional partner GoJet to operate the new aircraft.

United plans to begin introducing the aircraft to fleet this year, subject to government certification, and has executed a letter of agreement with GoJet for a deal to operate the aircraft for 10 years, subject to agreement on final terms and conditions.

The agreement will go into effect with the introduction of the first CRJ550, with planned entry into service by the summer of 2019. GoJet will operate the CRJ550 on select routes from Chicago, O’Hare, followed by Newark/New York.

“We are proud to be the provider chosen to fly this newly launched premium product for United Airlines,” said Richard Leach, president and CEO of GoJet Airlines. “Being part of a new product launch is very exciting for us and solidifies our importance as a strategic service provider in the regional airline marketplace, while providing long-term stability and growth for our company and our employees.”

United said the new aircraft will offer a state-of-the-art interior featuring LED lighting, a self-serve beverage and snack station for customers in the premium cabin, Wi-Fi and more overall legroom per seat than other 50-seat aircraft flown by US carriers.

The CRJ550 will also feature four storage closets for carry-on bags, the airline said this also makes the CRJ550 the only regional jet where customers will not need to routinely gate check their bags.

United’s aircraft will have a two-cabin configuration and will feature 10 United First seats; 20 Economy Plus seats and 20 Economy seats. United said the CRJ550 aircraft will eventually replace existing single-cabin 50-seat aircraft and will bring a higher percentage of two-cabin departures to smaller cities across the carrier’s network.