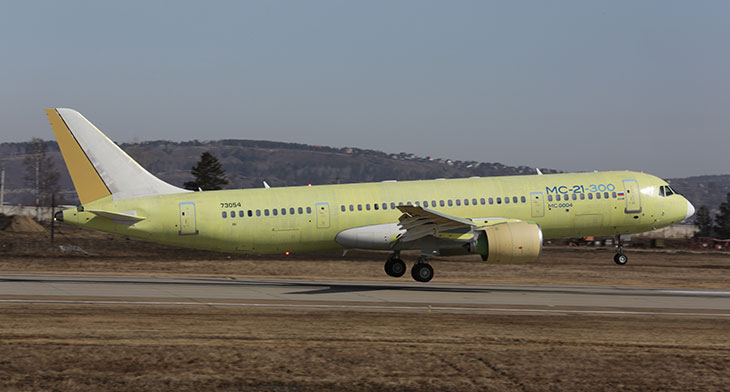 The maiden flight of the third MC-21-300 took place on 16 March at Irkutsk Aviation Plant, flown by test pilots Andrey Vorpayev and Roman Taskaev. The one hour 30-minute flight reached an attitude of 11,500ft at a speed of 450km/h. The crew reported no problems and the flight was completely normal.

Ministry of Industry and Trade of the Russian Federation Denis Manturov said: “MC-21-300 flight tests are continuing. Today the third aircraft joined the test fleet. This aircraft carries not only specialised test equipment but is fitted with a passenger cabin as well.”

According to Manturov, its intended to have the public debut of the MC-21-300 aircraft, complete with its passenger configured interior, at MAKS-2019. “This will allow us to visually demonstrate the potential to customers and passengers the advantages of the Russian airliner – an increased level of comfort,” he added.

Irkut Corporation is conducting MC-21-300 flight tests in order to obtain Russian and European operating certificates. The airliner is aimed at the low-fare and regional operators and is priced at around 15% cheaper than the A320ceo.