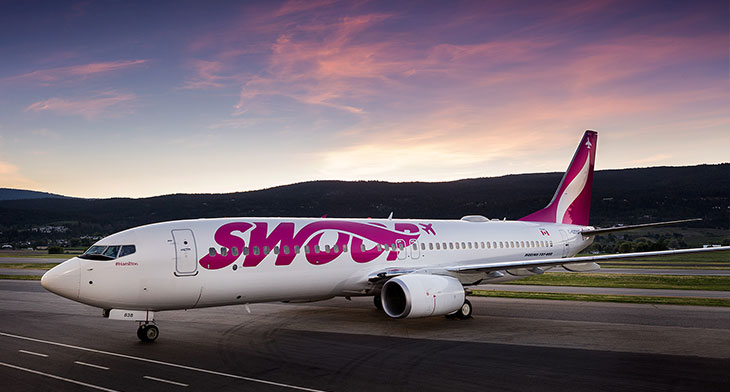 Swoop takes to the skies

Canadian ultra-low-cost carrier Swoop is up and flying after its inaugural flight from Hamilton to Abbotsford using one of its two 189-seat Boeing 737-800NGs.

The first flight on 20 June also coincided with the airline breaking the 100,000 milestone in terms of the number of seats sold so far. The WestJet subsidiary will operate domestic flights between Abbotsford, Edmonton, Winnipeg, Hamilton, and Halifax, and says its fares will be approximately 30-40% less than the typical national carrier. Swoop will charge ancillary fees on everything from carry-on baggage to standard seat selection.

Its president, Steven Greenway, said John C. Munro Hamilton International Airport was where the airline chose to locate its first base because the city ticked all the boxes in terms of ULCCs, being a small uncongested and cheaper airport that was simple to operate from. Other bases will be set up in the coming years, with additional destinations into the United States and potentially Mexico expected to be announced before the end of this year.

It plans to have six aircraft in the air by the end of the year, and 10 during the course of 2019.

Canada was claimed to be the only G7 country without a true ULCC until Swoop’s launch, although Flair Airlines might disagree, and both Canada Jetlines and Enerjet are planning on bringing further ULCC options to the table.