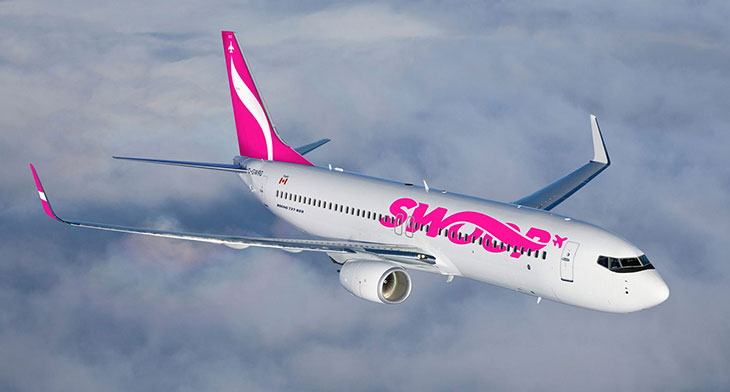 The Canadian ultra-low-cost airline Swoop has welcomed its one-millionth traveller, less than a year from its first flight.

The airline marked the milestone on a flight from Edmonton to Hamilton this week with gifts for the lucky one-millionth traveller and a celebration in Edmonton at the gate.

The airline is a month away from reaching one full-year of operation, having begun flights on 20 June 2018, with an initial fleet of three aircraft and a network of five Canadian cities. Since its launch the airline has expanded service to include 16 destinations across four countries.

“The best compliments we receive are affirmations from word-of-mouth referrals,” said Karen McIsaac, Sr. advisor of communications for Swoop. “Of those who try us, more than 94 per cent say they would fly with Swoop again. This kind of awareness and endorsement has been our biggest ally in bringing more affordable air travel to everyone.”

“Swoop’s success at EIA shows they are meeting the needs of the travelling public,” said Tom Ruth, president and CEO of Edmonton International Airport. “Their growing list of Canadian and US routes include some of the most sought-after destinations for residents of the Edmonton Metropolitan Region.”

“Reaching one million passengers is a monumental achievement for Swoop and affirms that Canadians are embracing low-cost travel,” said Cathie Puckering, president & CEO, John C. Munro Hamilton International Airport. “This accomplishment is particularly impressive considering the airline has only been operating for 11 months. We are so thrilled to be Swoop’s base in Eastern Canada and look forward to welcoming even more Swoop passengers to our airport in the coming years.”

The airline is set to release its winter schedule in the coming weeks.