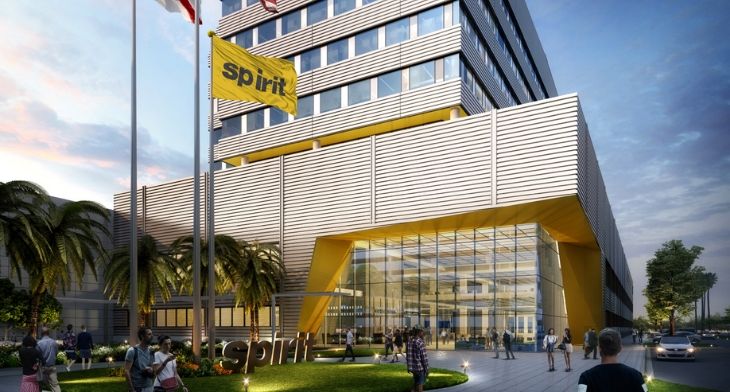 Spirit Airlines has broken ground on its new corporate headquarters in Dania Beach, minutes away from the airline’s largest operating base at Fort Lauderdale-Hollywood International Airport.

Spirit is investing up to $250 million for the creation of a corporate campus of up to 500,000 square feet of space. The development will include offices, a new crew training facility with flight simulators and a corporate training residence all designed for more streamlined workflow and quick access to the airport.

In 2022 approximately 1,000 employees are planned to move from the company’s current facilities in Miramar to the new Dania Pointe site.

“Spirit has called South Florida home for more than 20 years. This new investment will keep us connected to the community while improving our team’s efficiency and ability to support what is an ever-expanding international operation,” said Spirit Airlines President and CEO Ted Christie. “We look forward to partnering with our community, creating more jobs and driving future economic development as South Florida’s Hometown Airline.”

Along with the investment in the new campus, the airline plans to add 225 additional jobs over the next five years.

“Spirit Airlines is a major job creator for our state, and we are excited that they have chosen to expand their Florida footprint with this new corporate campus,” said Governor Ron DeSantis.

Spirit completed the purchase of the land from Kimco Realty and Gensler have been named as the architectural firm, while Jones Lang LaSelle was selected as the project advisor.

“Tourism and transportation go hand in hand, which is why we are excited that Spirit Airlines is expanding in Broward county,” said Jamal Sowell, President & CEO of Enterprise Florida, Inc. “Today’s groundbreaking is great for Spirit and the Sunshine State as our economy continues to grow.”

Adding to the route map

Earlier in the week the airline announced it is adding two new destinations in Colombia to its network in 2020 with service to Bucaramanga (BGA) and Barranquilla (BAQ) starting in April.

The airline suggested that the addition of these destinations to the airline’s route map means Spirit serves more cities in Colombia nonstop from the US than any other airline, with a total of 10 routes from two US gateways to seven Colombian cities.