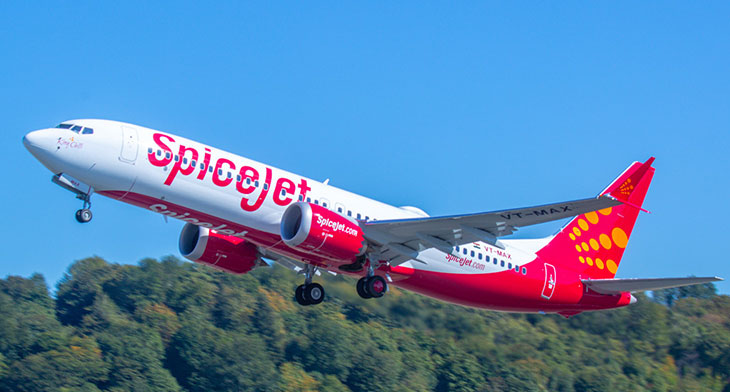 Boeing has delivered the first B737 MAX 8s to airlines SpiceJet of India and S7 Airlines of Russia, with the Indian carrier saying the aircraft will help it reduce fuel costs per plane by US$1.5 million per year.

SpiceJet’s chairman and managing director, Ajay Singh, said the induction of its first MAX was “a huge milestone in SpiceJet’s journey. These new airplanes will enable us to open new routes, while reducing fuel and engineering costs, as well as emissions.” He added the aircraft would help to dramatically reduce noise pollution and greenhouse gas emissions, with passengers to also benefit from – for the first time in India – broadband internet on board.

The airline has up to 205 737 MAX aircraft on order with Boeing, which will be used to increase both its regional and international routes.

“India is a fast-growing market for commercial airplanes and services,” said Ihssane Mounir, senior vice-president of commercial sales and marketing for The Boeing Company. He added it would become “a key ingredient for long-term success, especially as oil prices continues to put pressure on airlines.”

SpiceJet also signed up to leverage Boeing Global Services’ tailored flight simulator and maintenance training, which will help train its pilots and mechanics in all areas of 737 MAX flight operations. The airline also uses the Onboard Performance Tool, powered by Boeing AnalytX, which allows flight crews and ground personnel to perform real-time calculations based on current weather and runway conditions, improving efficiency and maximising payloads.

Boeing says that for SpiceJet’s full fleet of up to 205 aircraft, the MAX would emit up to 750,000 fewer metric tons of CO2 and save up to 240,000 metric tons of fuel per year, which it says translates to more than $317 million in cost savings annually.

S7 Airlines, meanwhile, will be the first Russian carrier to fly the MAX, and plans to operate 10 MAX 8s in total over the coming years via Globus Airlines under S7’s brand. The aircraft, being leased from Air Lease Corporation, are being added to its existing fleet of 19 B737Next Generation aircraft. The airline’s route network covers cities across Russia, the Commonwealth of Independent States and Europe.