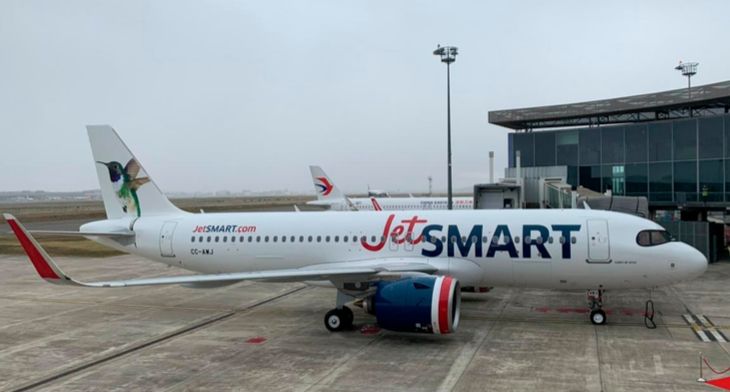 SMBC Aviation Capital has delivered the first Airbus A320neo to JetSMART, the ultra-low-cost carrier based in Chile, set to be used on routes in the region, including its new markets in Brazil and Colombia.

This marks the first delivery of an A320neo to JetSMART and is also the first of a five aircraft transaction with delivery scheduled between October 2019 and April 2020.

“This is one more step towards our vision of reaching 100 aircraft and 100 million passengers by 2026,” commented CEO of JetSMART, Estuardo Ortiz. “JetSMART welcomes our first A320neo and the new opportunities it brings, such as flights to Brazil and Colombia. More than 4 million people have already flown SMART: on a new airplane, safe, reliable and on-time for a few bucks. We thank SMBC Aviation Capital to share this journey with us.”

JetSMART is a new customer for the lessor and the aircraft will come from the company’s order book of A320 family aircraft with Airbus. The aircraft will be equipped with Pratt & Whitney GTF engines.

The tail of each of JetSMART’s new aircraft will display a South American animal, with the first aircraft featuring a Colibri of Arica, a critically endangered animal from the hummingbird family native to Chile.

Peter Barrett, CEO, SMBC Aviation Capital welcomed JetSMART as a new customer, adding: “This is an exciting time for JetSMART and we are happy that we can support them at this crucial growth stage. This delivery underlines our expanding footprint, not just in the Chilean market but right across the Americas region which is an important growth area for us.”

Arturo Barreira, president of Airbus Latin America and the Caribbean said “We are proud to see the A320neo at JetSMART, this aircraft incorporates the very latest technologies, including new generation engines and Sharklets, which together deliver more than 20 percent fuel and CO2 savings as well as a 50 percent noise reduction.”

This delivery takes SMBC Aviation Capital’s portfolio of owned and managed A320neo family to a total of 58 aircraft which are in service with a total of 18 airlines. The lessor has orders and purchase commitments for a further 175 A320neo family aircraft.