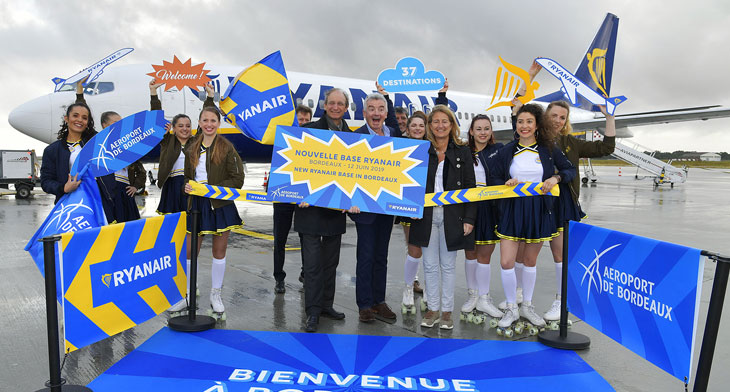 Ryanair has opened its second French hub with the launch of a new base at Bordeaux Airport.

Ryanair’s new hub in Bordeaux will have three aircraft based there, representing an investment of $300 million and will deliver 37 routes connecting 14 countries, and up to 86 weekly flights.

Ryanair’s Michael O’Leary commented: “We are pleased to open our second French base in Bordeaux, with three based aircraft (an investment of $300m), and 37 routes, delivering 1.4m customers p.a., creating 100 Ryanair pilot and cabin crew jobs and supporting 1,000 airport jobs.”

“When Ryanair opens a base in Bordeaux, it invests in its development,” commented Pascal Personne, chairman of Bordeaux Airport, calling it a “mark of obvious confidence in the dynamism of the neo-Aquitaine territory.”

Personne continued: “Ryanair’s anchorage in Bordeaux is a real boost from an economic and tourist point of view. The overall flight offer now includes 37 routes to 14 countries, including winter. No less than 25 new routes will be opened this year, reinforcing the 12 already existing routes.”