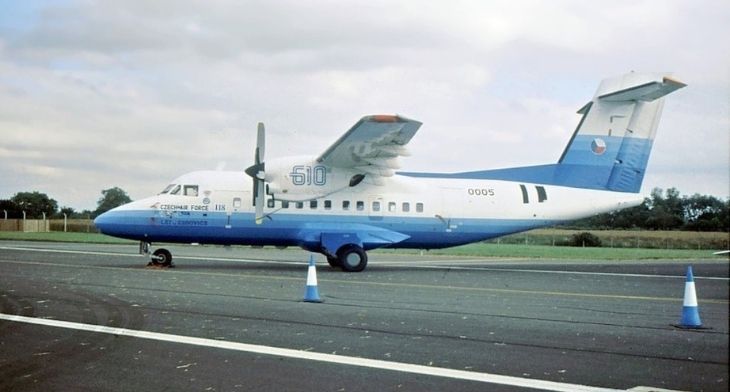 Russia’s ministry for trade and industry has disclosed that it intends to allocate state funding for a project to establish serial production of a modernised, redeveloped variant of the Let 610 (L-610) 40-seat regional turboprop developed by Czech aviation manufacturer Let in the mid-1980s.

Dmitry Lysogorski, head of the ministry’s aviation department, told the Russian Parliament’s Committee for Budget and Taxes on 18 October, that the required funding for the aforementioned research and development effort would total about 20- to 25 billion rubles ($313- to $391 million). The ministry hopes to provide the money later this year, pending approval from the Kremlin. “Today, in cooperation with the Czech Republic and Kazakhstan, we are planning to rework the initial project so as to resume series production in 2023,” Lysogorski stated.

Russian trade minister Denis Manturov explained to the media that the L-610 could generate sales in the CIS marketplace provided designers can incorporate a number of modernisation changes to the original aircraft, including an increase in seating capacity, gross weight, and flight range. “We speak of not launching this plane into production, but the development of a new regional turboprop aircraft using the scientific-technical base created in the course of the L-610 program,” stated Manturov.

State officials began discussing the L-610 in 2018. It was originally developed under Soviet orders in former Czechoslovakia in the 1980s. Many within the industry thought it had any chance for resurrection in the new Russia. However, in August at the Moscow Airshow, Polar Airlines signed an MoU with the Urals Plant of Civil Aviation (local acronym UZGA) covering of ten aircraft for delivery from 2023 to 2025. Controlled by Rostec Corporation, UZGA serves as a strategic partner to UGMK (local acronym for Ural Mining and Metallurgical Company), both based in Yekaterinburg, in the Urals region. The improved aircraft would use engines and avionics supplied by Russia.

In 2008 UGMK acquired a 51% stake in Aircraft Industries (formerly Let Kunovice, the L-610 manufacturer) for the purpose of localising production of the 19-seat L-410UVPE in Russia. Let developed the original L-410 twin turboprop in the 1960s and produced more than 1,000 aircraft, many of which were supplied to Russia, most of which were exported to the Soviet Union. UGMK teamed with UZGA on the type’s localization effort that saw local assembly start in 2016.

UGMK gradually increased its stake in Aircraft Industries and now owns the Czech company. The move prompted it to increase efforts on the L-610, which it considers an ideal addition to the 19-seat L-410 and 64-seat Ilyushin Il-114-300, the passenger turboprops programmes already approved by the Kremlin. In the early 1990s, Let Kunovice produced a single L-610G featuring 1750-hp General Electric CT7-9D motors turning Hamilton Standard HS-14 RF propellers, a combination that replaced that of the 1800-hp Walter M602 and Avia V518. But, the upgrade effort failed to gain any orders. This resulted in the cancellation of the project. While Russia does not produce an engine in this power class, last month United Engine Corporation general designer Yuri Shmotin announced plans for the development of the V?-1600V to replace the 1680-hp Turbomeca Ardiden 3G on the Kamov Ka-62 helicopter. A would-be turboprop version could potentially fulfil the L-610’s requirement.