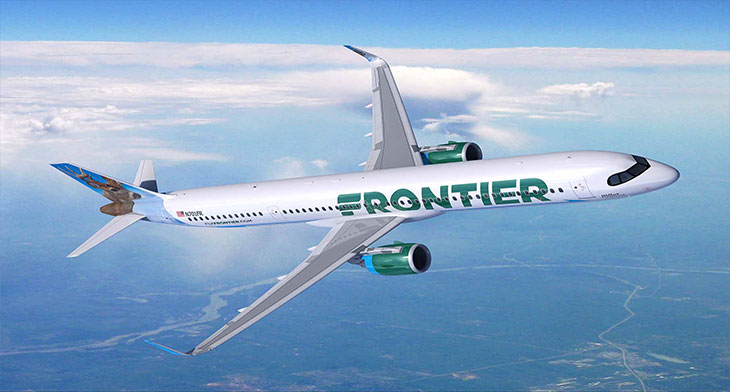 Indigo Partners and three of its low-cost airlines – Frontier Airlines, JetSMART and Wizz Air – are to acquire 50 Airbus A321XLR aircraft.

Indigo Partners LLC, the private equity fund with major ownership stakes in four low-cost airlines – including the three involved in the order – signed a Memorandum of Understanding with Airbus comprised of new orders for 32 A321XLRs, and the conversion of 18 existing A320neo family orders.

20 of the A321XLRs will be allocated to the Hungary-based Wizz Air, 18 to Frontier Airlines in the US, and 12 to the Chile-based JetSMART.

Speaking at the announcement at Paris Air Show, Bill Franke, managing partner of Indigo Partners, said: “As we looked at the new XLR and the opportunity it would provide the networks of these three carriers, we became convinced this was the aircraft that we need to have in our portfolio.

“It expands the network opportunities for our carriers dramatically and we think that’s important strategically for the positioning of the airlines related to the market and the competition.”

The three airlines remarked on the opportunities that the A321XLR could provide in expanding route networks.

Barry Biffle, CEO of Frontier Airlines, said the aircraft could “enable us to fly coast-to-coast in the United States, reach Hawaii with full density.” He suggested that it could also unlock international opportunities in Europe, South America and Central America.

The CEO of JetSMART, Estuardo Ortiz, called it a “tremendous opportunity” to reach routes “that were not possible before” from deep South America and to “markets we believe are very attractive and have high potential for stimulation.”

Josef Varadi, Wizz Air’s CEO, also remarked on the expansion opportunities, commenting: “We have seen that this aircraft type gives us a unique strategic advantage and opportunity to expand our network.”