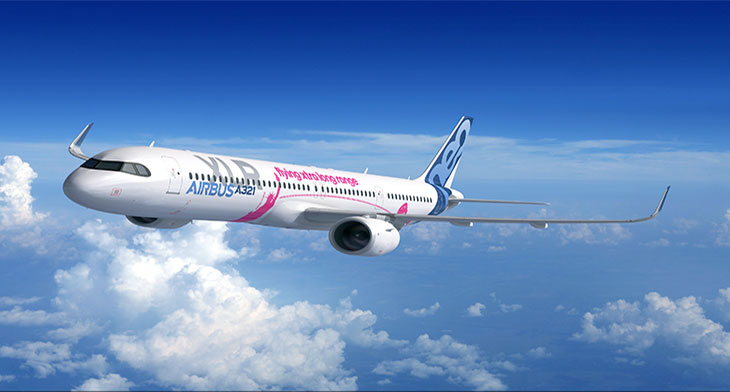 Airbus has launched its new long-range single-aisle aircraft, the A321XLR, with deliveries set to begin in 2023.

The aircraft aims to complement the A321neo Family as “the next evolutionary step” responding to market needs for more range and more value.

The aircraft claims a 30%-lower-fuel-burn per seat than previous-generation competitor aircraft, and will deliver an extra-long range of up to 4,700 nm – 15% more than the A321LR.

Airbus suggests that with this aircraft, airlines will be able to operate “a lower-cost single-aisle aircraft on longer and less heavily travelled routes – many of which can now only be served by larger and less efficient widebody aircraft.” Airbus has already received an order for the A321XLR from Air Lease Corporation (ALC) which has signed a Letter of Intent for 27 of the new aircraft type. This is part of a 100 aircraft order announced by ALC with Airbus at the Paris Air Show.

The A321XLR has been designed to maximise commonality with the A321LR and the rest of the A320neo Family.

The changes needed to give the aircraft its extra-long range with increased revenue payload include a new permanent Rear Centre Tank (RCT) for more fuel volume, a modified landing gear for increased maximum take-off weight (MTOW) of 101 metric tonnes, and an optimised wing trailing-edge flap configuration to preserve the same take-off performance and engine thrust requirements as the A321neo.

Answering questions from the media, Airbus CCO Christian Scherer said, these aircraft could connect “say, a secondary hub on the Eastern seaboard now with this capability opens destinations such as Rome that were previously out of range of even the LR version.”

New routes could also include India to Europe or China to Australia, as well as extending the Family’s non-stop reach on direct transatlantic flights between continental Europe and the Americas.