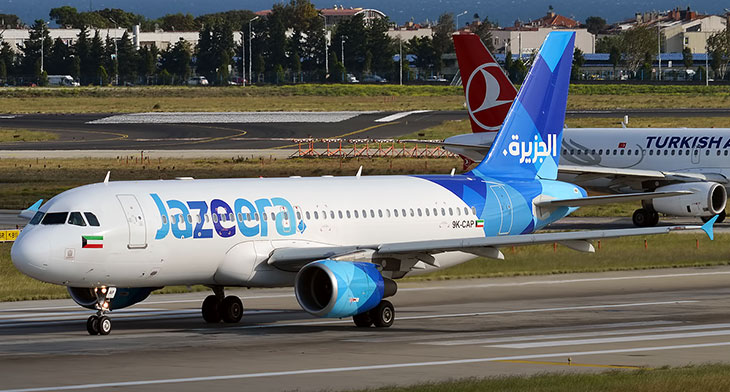 Kuwaiti LLC Jazeera Airways is due to launch flights to London Gatwick this autumn.

The airline has increased its fleet from seven to nine aircraft. Flying eight A320s, last year it took delivery of its first A320neo, all are based in the Middle East. By the end of the year, the airline expects to have a fleet of 14 aircraft, with an additional three joining the fleet next year. “This will bring the total fleet size to 17 aircraft,” CEO Rohit Ramachandran said. “All the new aircraft joining our fleet are A320neos, and we’re being quite opportunistic in terms of picking up distressed aircraft units rather than placing one large order.”

The operator views its target market as any destination within five hours flying time of its Kuwaiti hub, boasting a “a very good network” within the Gulf Cooperation Council, the large Middle East, the Levant, and destinations in the CIS. “In the last 18 months we’ve launched seven routes into the Indian subcontinent, which is also doing extremely well,” said Ramachandran. “We are one of the largest airline operators into Egypt, with nonstop flights direct to six cities. And now, with the launch of the London service, Western Europe is also within our reach.”

The airline will launch six new routes this year, the first of which the chief executive calls interesting. “It’s the first low-cost link between the Gulf Cooperation Council and London,”: noted Ramachandran “We’ll be launching a Kuwait to London service later this year. This will be on an A320neo. Later, there will be two routes into Turkey. And later still, flights to Nepal, Bangladesh and Abu Dhabi.”

The airline started operations in 2005 and quickly gained a reputation for reliability. However, ongoing problems within Kuwait’s aviation sector, with the demise of Wataniya Airlines in 2018 and the ongoing issues with Kuwait Airlines, an airline that has yet to return to profitability, has allowed Jazeera to establish a firm position within the market with a positive outlook.

“Jazeera has been in existence for 14 years and been profitable for most of that period,” said Ramachandran. “Dealing with competition is in our DNA, and as a LCC, with tight operating costs and close focus on our P&L, it’s a normal business day for use to deal with competition. The region is full of government-owned carriers with big, deep pockets and we are used to dealing with them.”