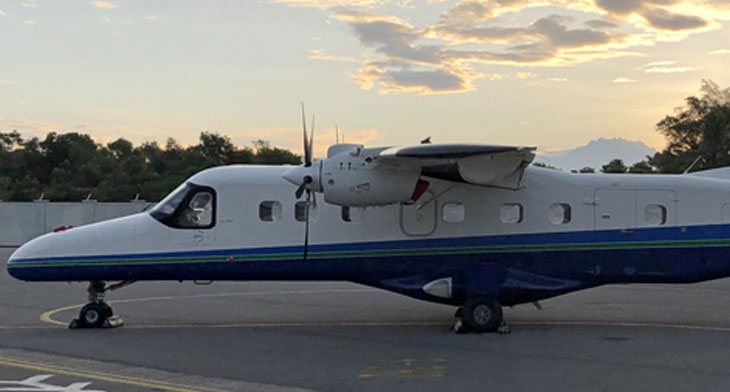 New Central Airservice (NCA), along with its partner Sojitz Aerospace Corporation (SOASCO) accepted delivery of the factory new 19-passenger commuter aircraft during a ceremony at the RUAG MRO International facilities in Oberpfaffenhofen, Germany, on 29 March 2019.

A RUAG Dornier 228 crew ferried the aircraft to Japan on the customers behalf, delivering it to the NCA and SOASCO facilities at Ryugasaki Airfield on 27 April. This marks the fourth new production series Dornier 228 to be delivered to NCA since 2010.

NCA operates its Dornier 228 fleet in passenger and cargo configurations, and NCA said the aircraft enables it to maintain its operations between the Japanese mainland and the remote Izu Islands, a flight plan entrusted to them by their municipal government.

Thomas Müller, director Dornier 228 Program, RUAG MRO International, commented: “NCA requires an aircraft whose reliability and consistent performance have been proven in challenging conditions, such as heavy weather fronts, high winds and cross-winds, as well as for demanding take-off and landing operations due to decisively short airstrips. The Dornier 228 continues to be the industry’s outstanding solution to these issues.”

“The delivery of this new aircraft to our loyal customer, NCA, marks another milestone in our Dornier 228 production and we are delighted to fulfill their expectations,” said Volker Wallrodt, senior vice-president Business Jets, Dornier 228, Military, RUAG MRO International. He added that the new aircraft “is vital for NCA in their mission to fulfill their government mandate.”