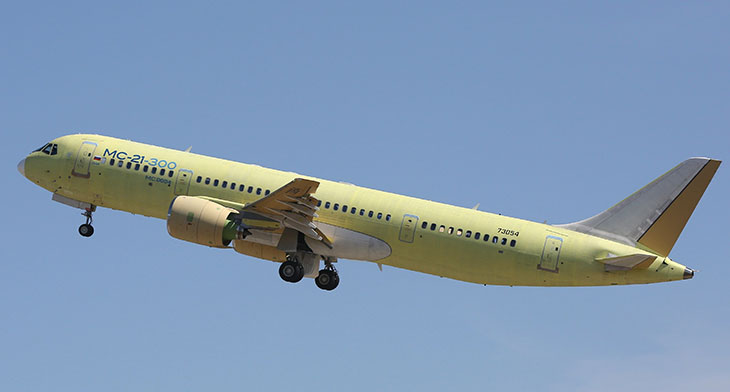 The first passenger configured MC-21-300 test aircraft conducted a non-stop flight from Irkutsk to Ulyanovsk Vostochny airport on 27 April. The airliner will now be painted at Ulyanovsk before flying on to Ramenskoye airport for further flight tests.

Flying the aircraft for its non-stop flight was Hero of Russia and honoured test pilot Roman Taskaev along with second pilot Vasily Sevastynov. The crew said that: “The flight was made in normal mode, without any complications.”

Ulyanovsk enterprises are the largest contractors for the MC-21 programme. The Aviastar-SP Plant produces the fuselage sections and tail along with a host of other components. AeroComposit-Ulyanovsk Company produces the composite wings.

Painting the MC-21-300 will be another of Ulyanovsk’s companies, Spektr-Avia.

President of UAC Yuri Slyusar said: “The Irkustkk aviation plant has completed the assembly and systems installation of the fourth MC-21-300 test aircraft. Adding a third and fourth aircraft will help increase the availability to conduct testing and allow the programme to achieve certification sooner.”