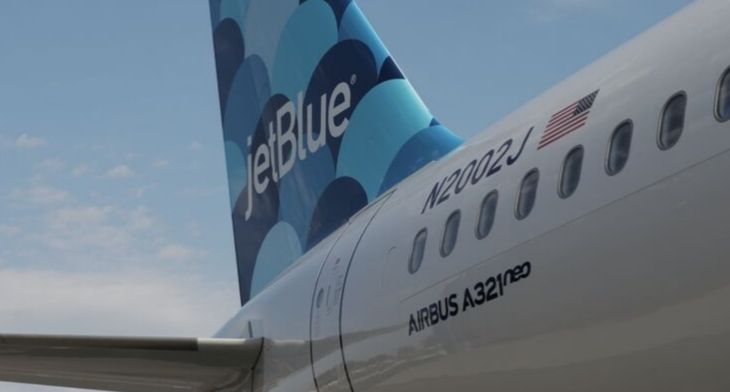 The newest aircraft to join JetBlue’s fleet, the A321neo boasts a 20% increase in fuel efficiency, supporting an extended range of approximately 500 nautical miles over the A321. The aircraft is set to operate across JetBlue’s existing network, but the airline did suggest the longer-range capabilities could open new markets which the existing fleet could not serve nonstop, including new service from New York JFK to Guayaquil, Ecuador beginning 5 December, and to Georgetown, Guyana, beginning 2 April 2020.

As the airline approaches 20 years of service in 2020, JetBlue invited founder David Neeleman to collaborate in the design of the new aircraft’s tail pattern, which includes five different shades representing the airline’s five values selected by Neeleman and the JetBlue founders: Safety, Caring, Integrity, Passion and Fun. The new aircraft has also been named in Neeleman’s honour.

“David Neeleman’s vision is as relevant today as it was 20 years ago,” JetBlue’s CEO Robin Hayes commented, particularly highlighting the airline’s approach to customer comfort and amenities, “Today we’re proud to continue in that tradition by introducing this new aircraft that’s both fuel efficient and features our most advanced cabin design.”

Hayes continued: “JetBlue’s new A321neo boasts features such as the widest and most comfortable seats available for this aircraft type, and a host of thoughtful design elements that are meant to enhance customer comfort and help our crewmembers deliver award-winning service.” JetBlue’s new seats have been designed with enhanced memory foam cushions, adjustable headrests and aim to deliver more living space, also offering what the airline said are the widest seats on the market and most legroom in coach. USB ports are located in each seatback monitor and the AC power ports have been repositioned in front of each seat.

Features in the A321neo cabin have been developed from feedback received from crewmembers and customers such as redesigned seatback pockets with an elastic ‘gadget panel’ stowage, mesh pockets for water bottles or personal devices and a larger pocket for laptops.

In-flight entertainment will feature a new 3D moving map and passengers will also be able to pair a personal device with the seatbacks to use as a remote. The aircraft will also be equipped with Viasat-2 for in-flight Wi-Fi which will offer expanded coverage on more than 99% of the airline’s route network, including over water and international cities.

The neo features a redesigned welcome area outfitted with residential finishes, full-height edge-lit partitions, and custom flooring, while sky blue mood lighting and uplifting music aim to enhance the boarding experience. The airline has also reinvented its take on a snack bar, providing an “onboard gathering place” for passengers to help themselves to free refreshments or extra snacks throughout the flight.

The airline has 85 A321neo aircraft on order, including 13 A321LR aircraft for service to London from New York and Boston (beginning in 2021), as well as 13 A321XLR aircraft, which JetBlue intends to use to serve European cities.