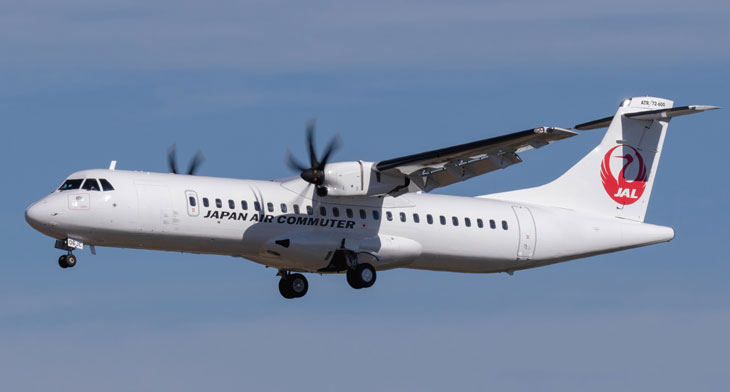 Japan Air Commuter Co. Ltd (JAC) has taken delivery of its first ATR 72-600 – the first of the larger turboprops to operate in Japan – after it converted an order in June for a 42-600 to the bigger version.

The 70-seat aircraft will allow the airline to be more flexible with its operations, said JAC’s president, Hiroki Kato. “The performance of our existing ATR fleet has been highly satisfactory, and this acquisition of an ATR 72-600 will allow us to be more flexible with our operations, matching capacity to demand more efficiently. The aircraft’s blend of one of the most modern cabins in regional aviation with excellent economics allows us to deliver the high standards of comfort that our passengers expect.”

ATR’s Chief Executive Officer, Stefano Bortoli, added: “Following the successful introduction of the ATR 42 in Japan last year there is no better proof of the quality of our aircraft than now seeing the ATR 72-600 ready to fly in Japan.”

The first 42-600 entered service with JAC early last year, with ATR saying the upgauging of this order reflects the -600’s ability to “effectively open and grow routes with the lowest possible risks, thanks to its 40% fuel burn advantage over its turboprop rival.” The delivery of the larger version will allow JAC to fly more passengers to airports with shorter runways that are only accessible by turboprop, it added.

JAC, a subsidiary of the JAL Group, has already taken delivery of five 42-600 aircraft and is introducing the first 72-600 to Japan with this delivery. The ATR 42 and 72 share a Single Type Rating and 90% of spare parts commonality.

Based at Kagoshima Airport, JAC operates 14 aircraft on 18 routes, and serves as public air transport for one million passengers annually between the Amami Islands and Western Japan.