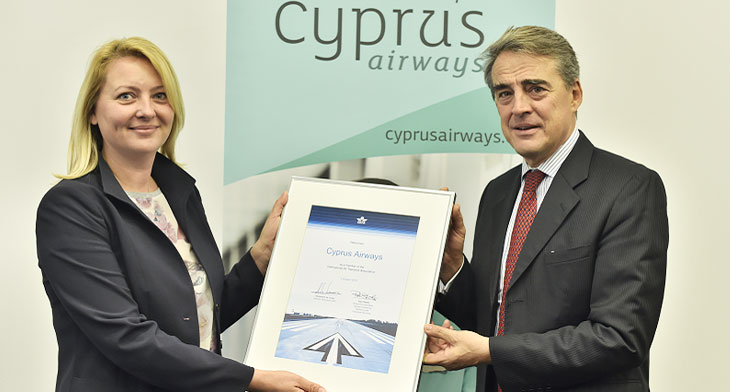 Cyprus Airways is based at Larnaca International Airport and has a fleet of two Airbus A319 aircraft serving 10 destinations, including Athens, Heraklion, Thessaloniki, Prague, Beirut and Tel Aviv.

It’s welcome news for the eastern Mediterranean island’s aviation sector, which recently saw Cobalt – itself only a member of IATA since March this year – have its operating licence revoked mid-October after the carrier grounded its fleet due to financial problems.

Natalia Popova, chief commercial officer at Cyprus Airways, said the carrier was “extremely proud to receive the certificate of our IATA membership and to officially join the IATA family. The membership will enable Cyprus Airways to collaborate with other international member airlines for codeshare and interline agreements, and provide a seamless travel experience through an extended global network to travellers to and from Cyprus.”

“Cyprus Airways plays a vital role connecting Cyprus with key markets in Europe as well as the Middle East. I speak for myself and the rest of the team when I say that we look forward to further collaborative work together with Cyprus Airways in the future,” said Rafael Schvartzman, IATA’s regional vice-president for Europe.

Previous reported interest by Virgin Atlantic was only related to slots at Heathrow leased from Virgin by Cobalt, a matter which has since been resolved.

Cobalt, in operation since 2016, had rapidly become the largest airline operating out of the republic, using six leased Airbus A320 aircraft. Five of those aircraft have so far been returned to the lessors.

[Photo: Natalia Popova of Cyprus Airways and Alexandre de Juniac, IATA’s director general and CEO, at the official ceremony to welcome the airline into IATA’s membership.]