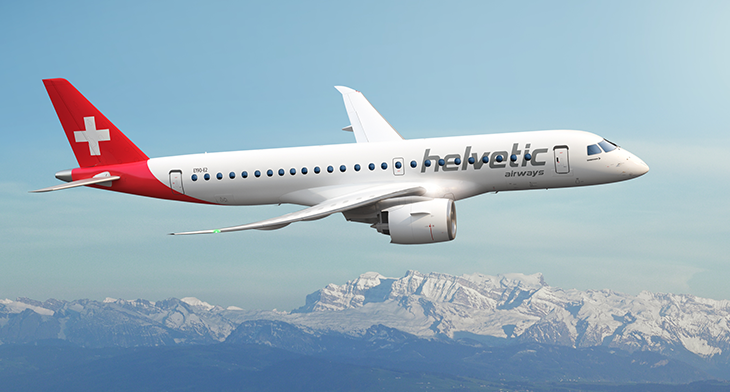 A dozen Embraer E190-E2 regional jets have been ordered by Swiss airline Helvetic Airways, firming up a Letter of Intent (LoI) first revealed at the Farnborough Airshow.

The firm order is valued at US$730 million, based on current list prices, says the Brazilian manufacturer, which will include it in its 2018 third quarter backlog. The contract, as stated in the original LoI, also includes purchase rights for a further 12 E190-E2, with conversion rights to the E195-E2. If all the purchase rights are exercised, the deal has a list price of $1.5 billion.

Embraer has been touring its shark-liveried E190-E2 around Europe and the CIS, and made the announcement during the aircraft’s visit to Zurich.

The first 12 single-aisle E2s will begin replacing Helvetic’s five Fokker 100s and seven E190s, starting late next year and completing by autumn 2021. The purchase options for a further 12 will enable Helvetic to grow according to market opportunities, they say.

Four of the airline’s existing E190 aircraft are in long-term service for Swiss International Air Lines as part of an ACMI partnership. Helvetic uses the remaining aircraft for ACMI flights and its own scheduled and charter business.