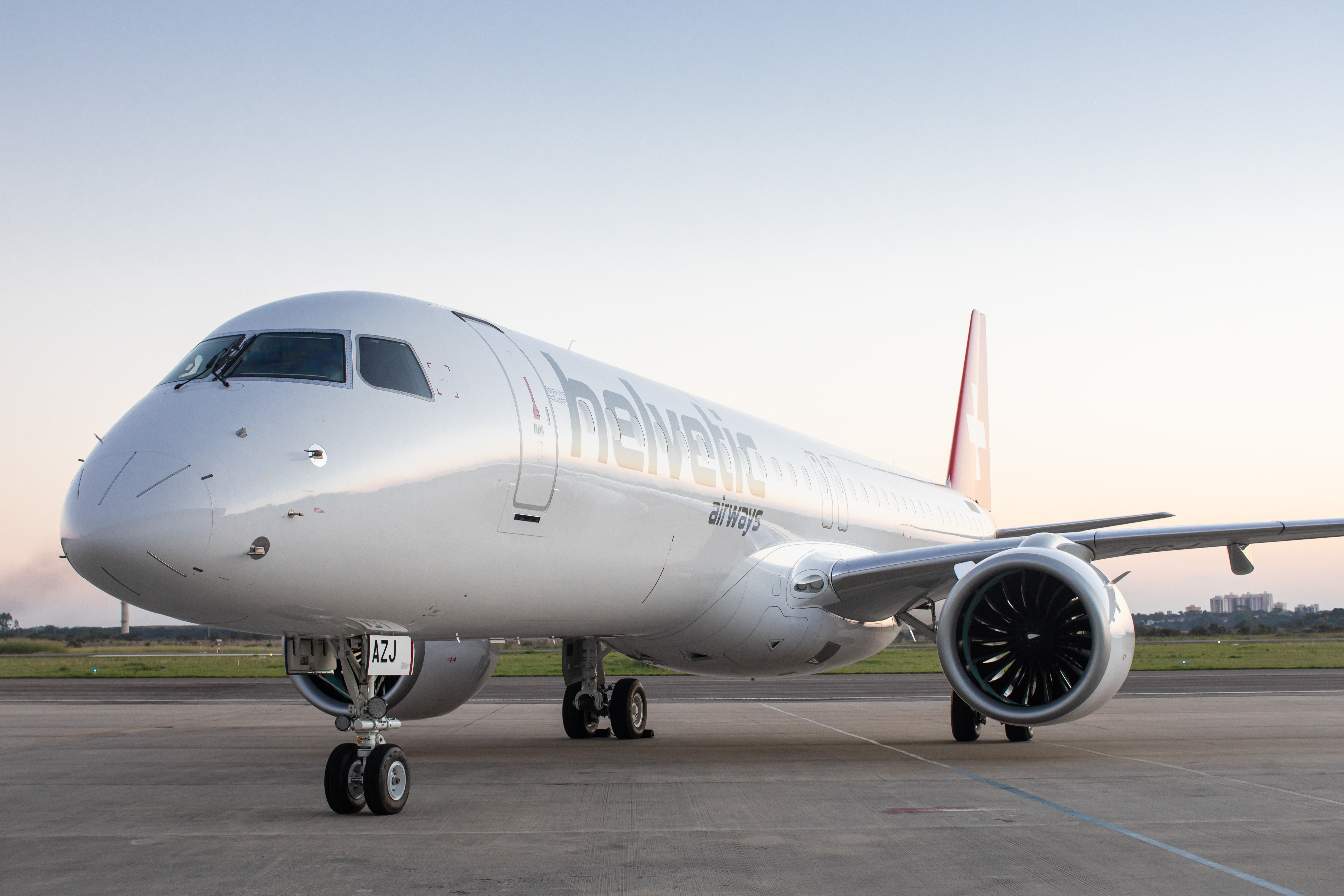 Helvetic Airways is about to take delivery of its first Embraer E195-E2. The aircraft, registered HB-AZI, is scheduled to arrive at Zurich Airport on 25 June. The Embraer E195-E2 is the largest aircraft in the Embraer E-Jet E2 family. Three further E195-E2s will be delivered to Helvetic Airways by the end of July. Their arrival will conclude on schedule a fleet renewal programme at the Swiss regional carrier which began in October 2019.

Swiss regional airline Helvetic Airways officially took possession of the first of its four new Embraer E195-E2s, the biggest aircraft in the Embraer E-Jet E2 programme, today. The transfer of ownership took place in Saõ José dos Campos, the headquarters of the Brazilian aircraft manufacturer. The event was a virtual affair, owing to the current coronavirus situation.

“With the delivery of the first of our four new Embraer E195-E2s, our fleet renewal is on plan to be completed by the end of July,” said Tobias Pogorevc, CEO of Helvetic Airways, at the delivery media conference today. “The structural changes in the demand for air travel that have emerged in recent months vindicate the strategic choices we made back in 2018,” Pogorevc continued. “With Embraer we have both the right types of aircraft and the right industry partner. Helvetic Airways now operates an optimal fleet mix in terms of capacity and sustainability. And as one of the leading E-Jet E2 operators in the world, Helvetic Airways will now be able to further strengthen its role as a Swiss airline in the European sky.”

“With the new E195-E2, Helvetic Airways is building further on its reputation as one of the most environmentally committed airlines in Europe,” added Arjan Meijer, President & CEO of Embraer Commercial Aviation. “Not only does this aircraft consume 25% less fuel than its predecessor: its noise footprint is also 65 per cent smaller. So it’s great news for airport region communities.”

HB-AZI is scheduled to leave Embraer’s headquarters in São José dos Campos tomorrow (Thursday), with stopovers in Natal and Las Palmas before arriving in Switzerland on Friday. The delivery flight is expected to cover some 9 900 kilometres with a flight time of approximately 11.5 hours.

Compared with the previous generation of Embraer E195s, the E2 has a reduced fuel consumption of 25% per seat, saving almost 3 000 tonnes of CO2 emissions per aircraft per year. Nitrogen oxide (NOX) emissions have also been cut by 30%. This outstanding environmental performance is made possible by the aircraft’s highly aerodynamic wing design and its latest-generation Pratt & Whitney engines. Its addition of four E195-E2s will make Helvetic Airways one of Europe’s leading Embraer E-Jet E2 operators, as well as one of the continent’s most sustainable airlines. The E2 further offers major benefits for local residents in Switzerland and at international airports: according to EASA’s certification figures, the E2 is 15 EPNdB quieter than its predecessor, which translates into a noise footprint reduction of 65%.

With its fleet of four Embraer E190-E1s, eight E190-E2s and very soon four E195-E2s, Helvetic Airways will possess the optimal aircraft mix to perform its mission in Switzerland and Europe effectively and efficiently. The current crisis has accelerated a regionalisation of air transport and a downsizing of aircraft. With their capacities of between 110 and 134 passenger seats, the Swiss carrier has the right aircraft to operate reliably and economically, and also to take full advantage of all the new opportunities in a post-pandemic market.

The new Helvetic Airways Embraer E195-E2 will be deployed primarily to destinations within Europe. HB-AZI is scheduled to make its first commercial flight on Saturday 10 July, from Basel to the Greek island of Santorini (flights 2L 306 and 2L 307). 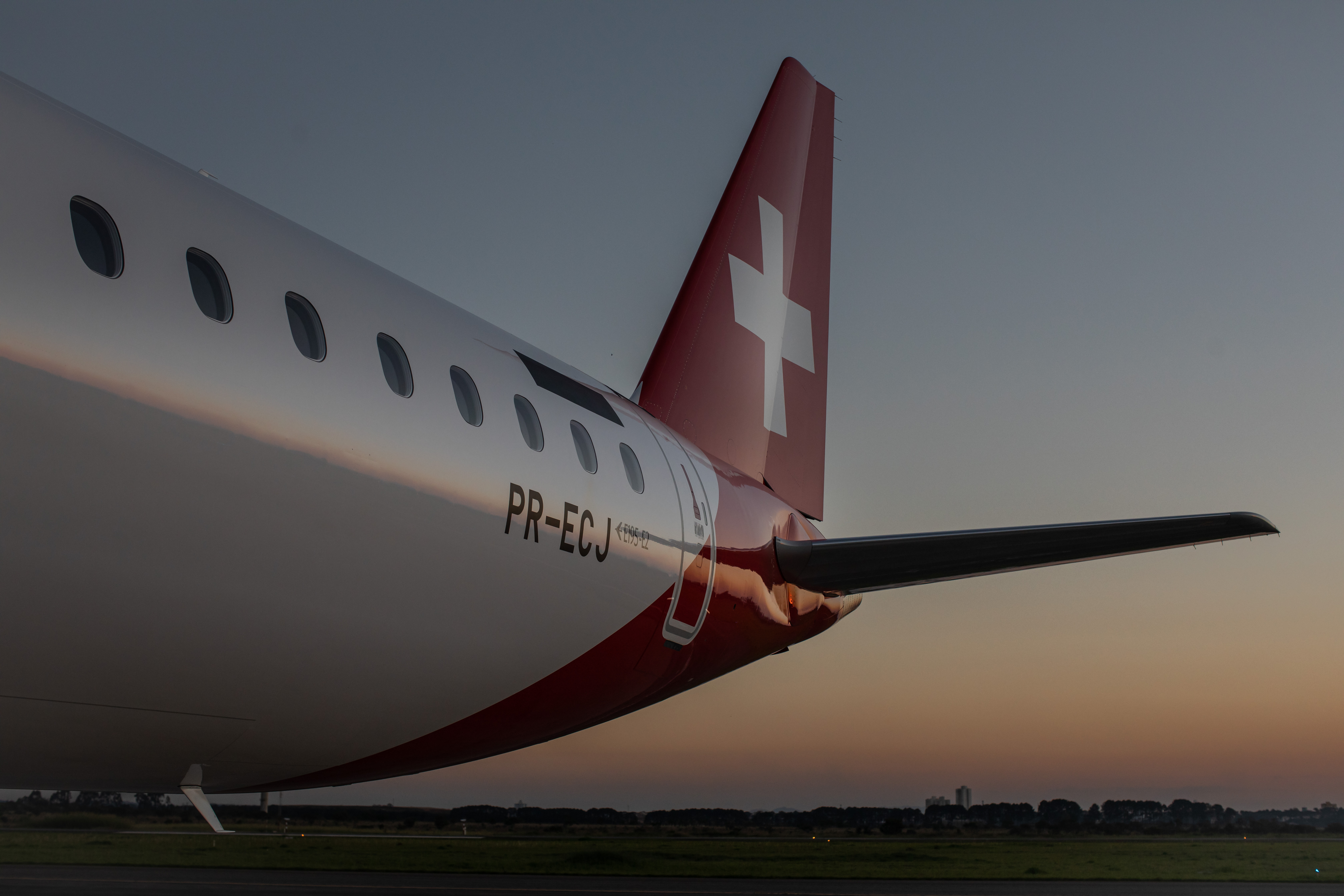