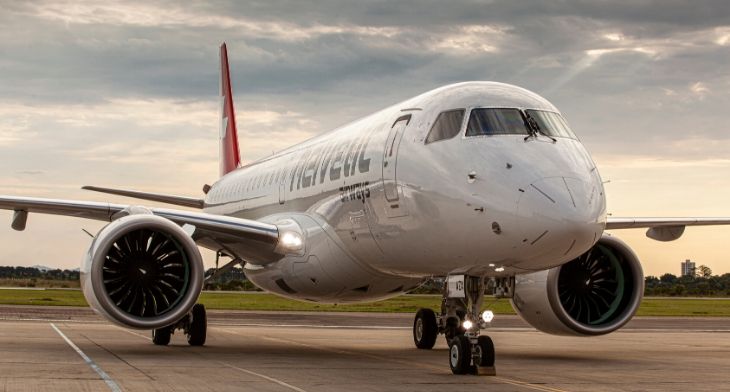 Helvetic Airways has received its first E190-E2 jet from Embraer, marking the beginning of the airline’s fleet renewal programme.

The aircraft marks the first from an order of 12 jets of the model with Embraer. The contract also includes purchase rights for a further 12 E190-E2 jets, with conversion rights to the E195-E2, bringing the total potential order up to 24 E-Jets E2s.

Helvetic Airways CEO Tobias Pogorevc celebrated the milestone that has been achieved “After more than eighteen intensive months,” he commented, adding: “it’s a sense of accomplishment that we feel most today. With the E190-E2, Helvetic Airways is entering a truly new era. Our state-of-the-art twinjet will make us one of Embraer’s leading European operators. And it gives us just the modern and environmentally friendly aircraft we need to continue our development.”

The new aircraft marks the start of Helvetic’s fleet renewal programme, and will be configured in a single class layout with 110 seats operated on domestic and international routes. Embraer remarked that the purchase rights will enable Helvetic Airways to grow according to market opportunities.

“As the only Swiss airline to operate Embraer aircraft, Helvetic Airways already stands out from the competition,” said Martyn Holmes, vice-president Europe, Russia & Central Asia, Embraer Commercial Aviation. “And, with our state-of-the-art E190-E2, it now has the perfect aircraft, in terms of environmental sustainability and to maximize the profitability of its flight operations.”