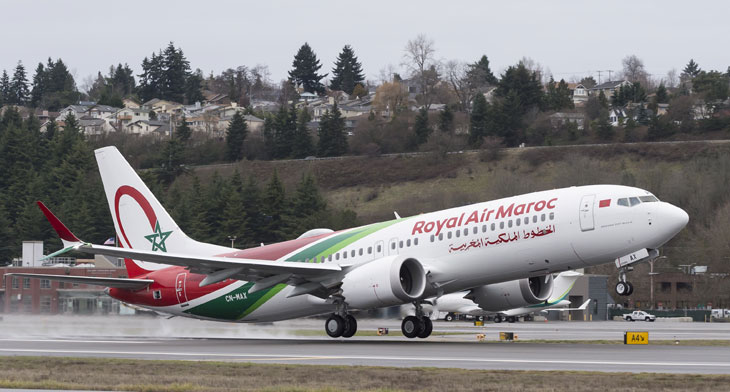 Moroccan flag carrier Royal Air Maroc has received its first Boeing 737 MAX 8, with three more of the single-aisle aircraft due for delivery over the next few months.

“These new 737 MAX airplanes expand our medium-haul portfolio, which forms the backbone of Royal Air Maroc’s fleet. Our choice of this airplane is in line with our strategy of continuously expanding and modernising our fleet, and comes just a few days after the announcement of Royal Air Maroc’s invitation to join the most prestigious Oneworld Alliance,” said Abdelhamid Addou, the airline’s CEO and chairman.

The carrier already has a fleet of Next-Generation B737s, and also received its first B787-9 Dreamliner last week, with three more of the widebodies on the way.

The MAX 8 can seat up to 178 passengers in a standard two-class configuration and fly 3,550 nautical miles (6,570 kilometres). The airline plans to deploy its MAX 8s on routes from Casablanca to Accra (Ghana), Lagos (Nigeria), London-Heathrow (England), Bologna (Italy) and Paris (Orly and CDG).