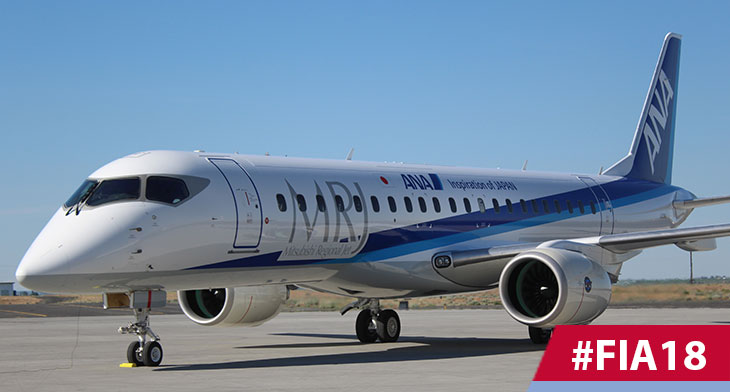 Mitsubishi is debuting its long-awaited MRJ90 regional jet today, a sight that has taken several years longer than originally expected to finally appear at the Farnborough Airshow.

The 90-seat aircraft first debuted on static display last year at the Paris Airshow, but as of today it is up and flying as the testing and certification programme proceeds towards its planned entry into service by mid-2020 with Japan’s All Nippon Airways (ANA). The previously troubled aircraft programme is on track with a strenuous flight testing schedule being undertaken in the US at Moses Lake, where it has four MRJ90s being tested.

Two more will join the test fleet in the next couple of months, while Mitsubishi is keen to push on with the development of the smaller sibling, the 76-seat MRJ70 which will also head to Moses Lake for testing when the first is built in the near future.

At Farnborough, Mitsubishi is rolling out its big guns for the first flying display today, with Shunichi Miyanaga, president and CEO of Mitsubishi Heavy Industries, on hand to comment, along with Hisakazu Mizutani, president of Mitsubishi Aircraft, both of whom will be delighted – along with their airline and leasing company customers – that the programme has reached this key milestone on its previously troubled journey.