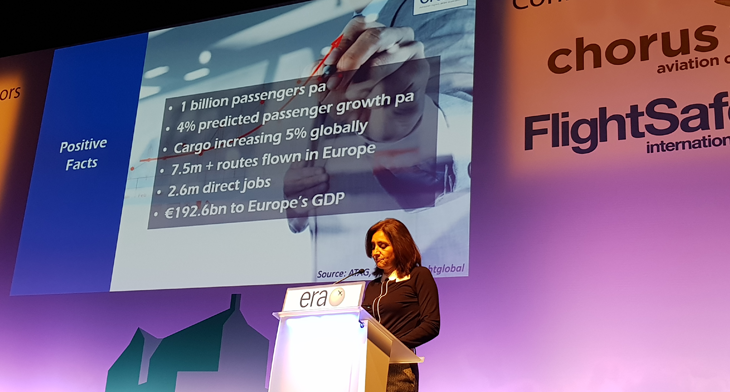 The director general of the European Regional Airlines Association (ERA) has vowed to continue lobbying hard for the right outcome from Brexit for the regional aviation industry.

Montserrat Barriga, speaking at the ERA’s annual assembly in Edinburgh, voiced her belief that common sense would eventually prevail in order to keep airlines in the air after the deadline at the end of March. “I personally think peoples’ and companies’ needs will prevail and there will be a positive agreement. I am optimistic – but still realistic,” she told delegates.

Barriga continued: “European citizens need an open and unrestricted bilateral agreement between the EU and the UK. An early and favourable resolution of Brexit negotiations is urgently needed.”

Both the European Union and the UK need to be far more transparent, she added. “Do we really think there will be aircraft grounded because of the lack of a political agreement? Brexit is a European problem that needs agreement for aviation before the UK formally leaves the EU – and not just the day before it leaves the EU.

She described the industry as being in “positive times” but that it worked in one of the toughest business environments and that it faced a number of challenges including a growing claims culture and the ongoing pilot shortage.

European regional carriers are even more exposed to losing crew and technical personnel to strong demand in Asia, said Barriga, as they move to both low-cost and legacy carriers. “We are the last in the food chain,” she added.

The ERA has 50 member airlines, which together fly more than 74 million passengers per year on 1,800 routes in Europe.