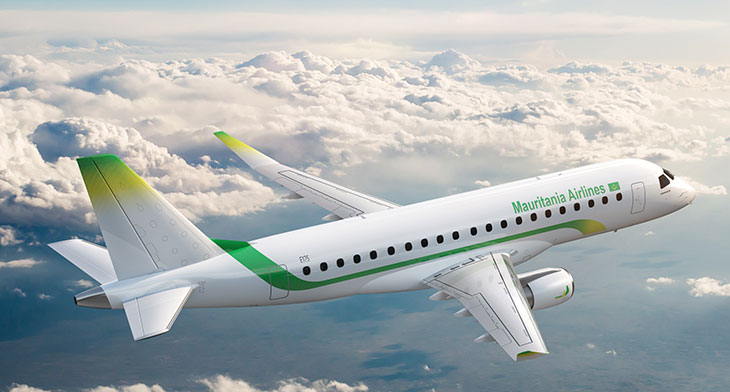 Embraer has made a series of Pool Program announcements with airlines serving regional and domestic routes in Africa at MRO Americas.

The OEM signed a Pool Program Agreement with Mauritania Airlines to support a range of repairable components for its two new E175s.

Mauritania Airlines is the first E175 operator in Africa and received its first E175 from Embraer at the end of March, while the second is expected for the second quarter of 2019.

The multiyear agreement includes full repair coverage for components and parts as well as unlimited access to a large stock of components at Embraer’s distribution centre. Embraer is also offering a door-to-door solution to minimise the logistical burden for the customer and the onsite stock, which is the inventory of NO-GO components Embraer provides at the customer’s facility.

“The support of the OEM is the best choice for Mauritania Airlines and our new E175 fleet. It will allow us to reduce lead times and costs of our daily operations, guaranteeing efficiency and competitive results,” said Emal Mint Mawloud, CEO of Mauritania Airlines. The airline’s operations cover a West African regional network and provide regular connections to Maghreb and European destinations.

Embraer also signed a Pool Program Agreement with Air Botswana to support a range of repairable components for its E170 aircraft. The multiyear agreement includes full repair coverage for components and parts as well as unlimited access to a large stock of components at Embraer’s distribution centre. “We are delighted to serve Air Botswana with a product that will provide streamlined solutions for its E170,” said Johann Bordais, president & CEO, Embraer Services & Support.

“Air Botswana looks forward to our partnership with Embraer. Increasing the availability of spare parts for our aircraft will help our daily operations and we are excited about efficient solutions,” said Agnes T Khunwana, general manager of Air Botswana. The airline operates scheduled domestic and regional flights from its main base at Sir Seretse Khama International Airport.