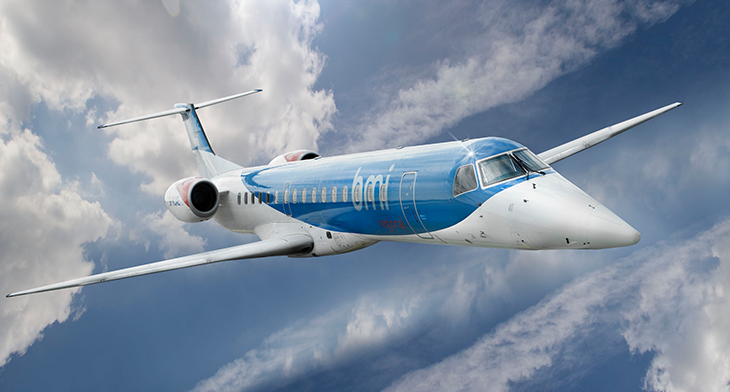 In another blow to regional aviation in Europe, the UK’s East Midlands-based carrier operating as flybmi announced on 16 February that it had ceased operations and is filing for administration. This comes just a few weeks after the independent German airline, Germania, filed for insolvency and terminated its flight operations.

“It is with a heavy heart that we have made this unavoidable announcement today,” a spokesperson for flybmi said. “The airline has faced several difficulties, including recent spikes in fuel and carbon costs, the latter arising from the EU’s decision to exclude UK airlines from full participation in the Emissions Trading Scheme.”

The airline also said its current trading and future prospects had been affected by Brexit uncertainties, “which has led to our inability to secure valuable flying contracts in Europe and lack of confidence around bmi’s ability to continue flying between destinations in Europe. Additionally, our situation mirrors wider difficulties in the regional airline industry which have been well documented.”

The spokeperson concluded: “We sincerely regret that this course of action has become the only option open to us, but the challenges, particularly those created by Brexit, have proven to be insurmountable.”

The airline operates 17 aircraft on routes to 25 European cities and has cancelled all flights. In 2018 it carried 522,000 people on 29,000 flights. Flybmi employed 376 people based in the UK, Germany, Sweden and Belgium.

Commenting on the announcement, Tim Alderslade, chief executive of Airlines UK, an industry association representing 13 UK carriers, said it demonstrates the “ferociously competitive” operating environment for airlines, adding: “It should give Government – and other parts of the industry who relentlessly champion passenger growth but too frequently neglect the challenges carriers face – pause for thought about the costs they are asking airlines to absorb and to what extent this is sustainable into the future.”

Flybmi was a member of the European Regions Airline Association (ERA), and following the airline’s collapse, the association has urged the European Commission and the UK Department of Transport to finalise the forthcoming aviation plans for Brexit “as a matter of urgency” and warning “this current airline failure is only the beginning if we do not resolve the uncertainty surrounding the Brexit agreement.”

Montserrat Barriga, ERA director general, said she was “deeply saddened” to learn that flybmi had filed for insolvency, adding: “Rising fuel and carbon costs coupled with the uncertainty, unfairness and challenges surrounding Brexit has led to the airline ceasing all operations.”

Barriga previously wrote to the European Commission in November to call for action, and has now said: “I will once again be in direct contact with the European Commission and the UK Department of Transport, as a matter of urgency, to persuade them to act immediately. It is imperative that they put in place a comprehensive agreement for aviation that mirrors the current situation with the UK as the highest priority, and that they reach a solution that will allow airlines to continue operating as they do today, enabling Europeans to continue benefiting from affordable and stress-free travel.

“This is a sad day for European aviation and a clear example of the impact of a too long uncertainty surrounding Brexit,” she concluded.

It would seem that for airlines in Europe, these Brexit concerns, coupled with the intense competition in the short-haul market and the fluctuating fuel costs felt across all airlines (Germania also cited this as a major contributory factor in its demise) have created the perfect storm, with the potential for more trouble on the horizon.