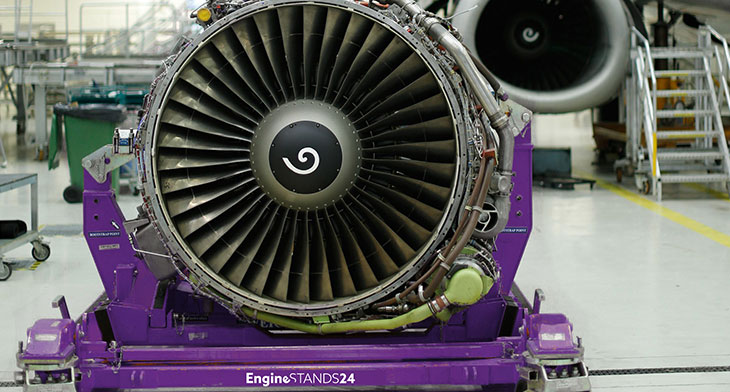 The industry has gathered again this week, this time in Dubai, for the MRO Middle East and AIME 2019 event, where MROs and service providers seem to be looking to expand their operations to meet increasing demand in the growing market.

According to Boeing’s latest report, Services Market Outlook 2018-2037 – Middle East Perspective, the Middle East will require US$745 billion in aviation services through to 2037.

The services market is largely driven by the forecast demand for nearly 3,000 new commercial aircraft in the Middle East over the next 20 years, as the growing fleet will require aviation services, including supply chain support (parts and logistics), maintenance and engineering services and aircraft modification.

The report suggests that the Middle East will drive more than 8% of global demand for aviation services, growing at a projected 4.6% annually.

Expanding into the Middle Eastern MRO market, EngineStands24, a subsidiary of Magnetic MRO, has launched a new engine stands hub in Dubai, in co-operation with Chabok Aviation.

The company announced its plans to launch a new logistics centre for its engine stands in Dubai back in November. Dubai offers a “strategic location” for the company at the heart of the growing market, and also positions EngineStands24 to deliver around the world within a few days or even hours.

The new hub will store stands for narrowbody aircraft engines, including CFM56-5A/B, CFM56-7B and V2500.

Daiva Žemaite, the head of EngineStands24, called it an “important step for both Magnetic MRO and EngineStands24, as we keep expanding into the Middle Eastern MRO market.”

Magnetic MRO itself is also planning to expand its reach, signing a Memorandum of Understanding with First Premium for Support Services (FPSS) for joint EASA-compliant MRO operations in Saudi Arabia and the wider region, agreeing to jointly establish and develop wheel & tyre, brakes, oxygen refill and battery shops in Jeddah.

Elsewhere, the past week has also been one of celebration for Bombardier, with the launch of the new 50-seat aircraft, the CRJ550. Fred Cromer, president, Bombardier Commercial Aircraft, said the model is “the only solution in North America that can replace the existing fleet of ageing 50-seaters, a market of over 700 aircraft.”

The latest member of the CRJ Series family has a new type certificate based on the CRJ700 and will offer three cabin classes. United Airlines has been announced as the launch carrier for the new aircraft, and is planning to introduce 50 of the CRJ550 to its regional fleet. The airline has selected its regional partner GoJet to operate the new aircraft.

As the sun sets in Dubai, we look forward to seeing what announcements will come as a result of the event and while some companies are forming collaborations and announcing expansions, some airlines and IFEC suppliers will have their own reasons to celebrate with the Inflight Awards, rounding off a couple of days of great discussions from the Inflight Middle East Workshop event. Our congratulations go to all the award winners, as well as all those nominated for the awards.