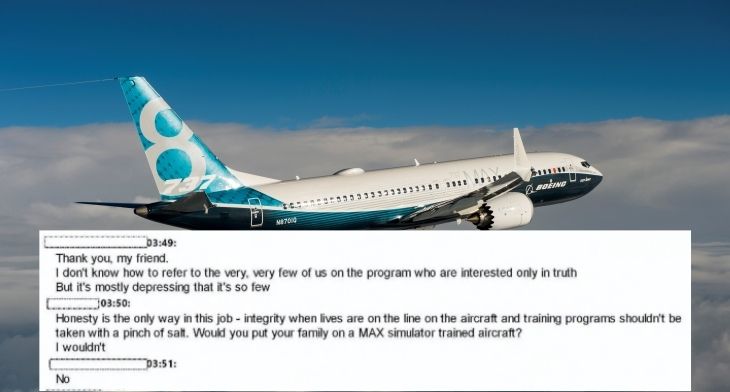 Just when it appeared that things could not get any worse for Boeing with regard to the MAX crisis, it’s now been revealed that company employees openly mocked and derided the troubled 737 MAX, months before the entire fleet was globally grounded.

A cache of internal company emails reveals how Boeing staff joked about the potential flaws in the aircraft before two examples crashed within five months killing 346 people.

In an email dated April 2017 an employee wrote: “This aeroplane is designed by clowns who in turn are supervised by monkeys.”

Staff discussed covering up problems from US authorities, including the simulator used to train pilots on the aircraft.

Perhaps, the most devastating exchange occurred when an employee asked a fellow worker in 2018: “Would you put your family on a MAX simulator-trained aircraft? I wouldn’t.”

Both crashes have been blamed on faulty software which was designed to stop the aircraft from stalling but instead repeatedly pushed it into a nosedive. As the crisis approaches a year, Boeing is still working to update the software and other systems on the MAX to convince FAA regulators to let it fly again. The grounding is costing the company billions in compensation to families of the passengers killed in the crashes and the airlines, which have had to change thousands of flights. These emails are the latest in a series of revelations which have called into question the interactions between the aircraft manufacturer and the FAA.

In another tragic accident, an earlier variant of the Boeing 737, a 737-800 operated by Ukraine International Airlines as Flight PS752, crashed shortly after take-off in Iran during the early hours of January 8. All 176 onboard were killed. This took place as the military crisis between the US and Iran reached fever pitch with missiles being fired at Iraq by the Iranian military. In the days immediately following the crash, engine failure was believed to have caused the accident. With Ukraine and Boeing officials barred from entering the country, this proved to be just pure speculation. Video footage emerged of PS752 on fire after appearing to be struck by a missile. On January 11, Iran military admitted firing the missile, which downed the airline. The military said the missile was fired due to a “human mistake”. Iran’s President Hassan Rouhani also confirmed the news on social media, calling it “disastrous” and “unforgivable”. Later in the day, Iran confirmed it had now invited Ukrainian investigators to scour the crash site for rocket fragments. But, witnesses at the crash site released images of the debris being bulldozed into a number of ditches, in the process destroying vital evidence. I’ve no doubt that in cases such as this, the whole truth will take a long time to come out – if ever.

In much the same way, the real story of the MAX development is only now being revealed, after two tragic accidents. The chain of events that led to the loss of PS752 may take months if not years to be made public.