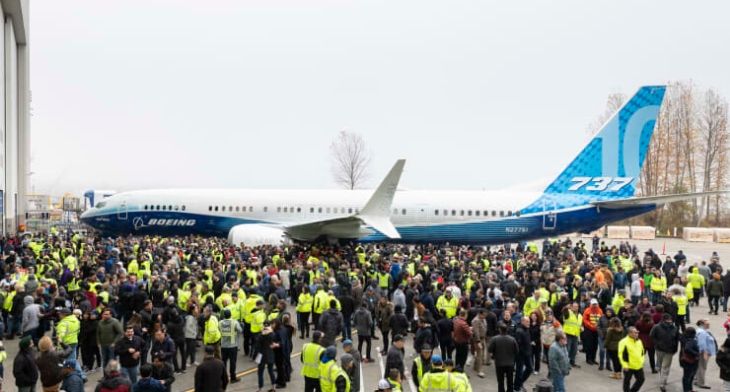 On Friday 22 November, Boeing employees gathered at Renton, Washington, to watch the rollout of the aircraft manufacturer’s latest 737, the MAX 10. Compared with similar occasions the event was a somewhat low-key affair given the controversy that still surrounds the MAX series. During the ceremony the focus was on Boeing employees who’d been working on the latest narrowbody jet programme.

“Today is not just about a new airplane; it’s about the people who design, build, and support it,” said 737 programme VP and general manager Mark Jenks. “This team’s relentless focus on safety and quality shows the commitment we have to our airline customers and every person who flies on a Boeing airplane.”

With capacity for up to 230 passengers, the 737 MAX 10 is the largest of the MAX family of jets. The debuting aircraft will undergo system checks and engine runs before its first flight that is scheduled for next year. Ironically, this may well coincide with the return to flight of the earlier series of MAX aircraft, which have remained grounded since March 2019 after two fatal crashes.

Although Boeing states over 20 global customers have placed more than 550 orders and commitments for the MAX 10, it remained vague as to when these aircraft would be delivered or declined to split the orders.

Boeing’s projection for returning the earlier MAX series to service keeps slipping. The head of the US FAA, Stephen Dickson, stated at the Dubai Airshow that March is a “more conservative” schedule for certifying the airliner as safe to fly.

For the Boeing 737 MAX 10, the aircraft will now go through similar system and engine tests that the earlier variants went through, and is expected to fly in 2020, but Boeing company spokesman Doug Alder made it clear that “no date had been set for the MAX 10’s first flight”.

As 2019 draws to a close, it’s clear that 2020 may well be a ‘make-or-break’ year for Boeing, in terms of regaining the trust once again of the commercial aviation industry and passengers who flew so frequently on the 737 series in their thousands every day.