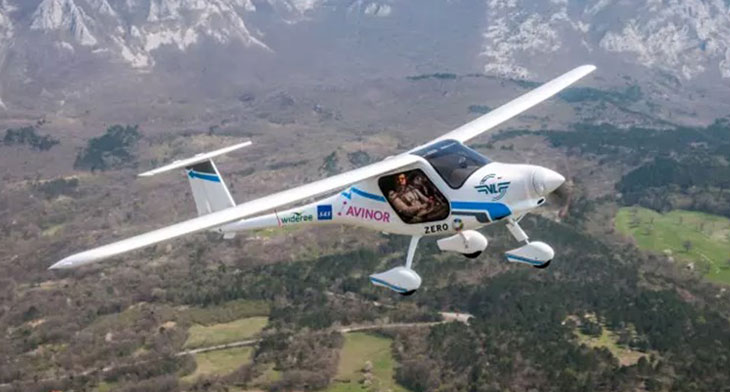 The eventual arrival of electric and hybrid-powered aircraft into the world of urban and regional aviation is a matter of when, not if.

The question of when exactly is a little harder to predict, but the CEO of Norway’s Widerøe, Stein Nilsen, is a believer. His airline is one of the strongest proponents of electric aircraft as a solution for ultra-short-haul regional aviation, a solution coming ever nearer with the first flight earlier this week in Norway of the Alpha Electro G2 electric plane.

The two-seater aircraft made in Slovenia by Pipistrel took off at Oslo Airport with Norwegian airport operator Avinor’s CEO, Dag Falk-Petersen as the pilot and the country’s minister of transport, Ketil Solvik-Olsen as the passenger. It may only be a two-seater at this point, but it can fly for up to an hour.

Avinor has been tasked by the Norwegian government to develop a programme that paves the way for the use of electric aircraft in commercial aviation, and it’s working with serious airlines like Widerøe and SAS to make it happen.

Widerøe wants to have a sub-50 seat plane within the next decade or so to potentially replace its ageing fleet of approximately 40 Bombardier Dash 8-Q100s and 200s that fly many of its small and remote, short-haul ‘fjord hops’ – some less than 10 minutes in flight time. With government-backed incentives likely to include no landing fees for electric-powered light aircraft and no cost for recharging until at least 2025, solutions at the smaller end of the scale will be an increasingly viable commercial option for Widerøe, which has also reached out to other manufacturers.

Nilsen told me during a recent visit to see its new Embraer E190-E2 jet (that subscribers can read about in full in LARA’s June-July issue) that it was looking for “another technology rather than the traditional turboprop. We are pretty convinced that the next generation of small aircraft will use electric motor propulsion.” Whether the power comes from all-electric batteries, hybrid technology or fuel cell technology isn’t yet clear, but he said that it would be so within three to five years.

“I’m personally really convinced that the electric motor will be the solution for most of the challenges that we have – for short take-offs, short landings and so on. We have got to do something about emissions, so we have to look at new propulsion systems for short flight lengths like ours. Someone has to take the lead on electric or hybrid.”

It will be a while longer before such options are commercially viable, whether through electric or hybrid solutions. But the time of electric-powered regional aviation is no longer a pipe dream.