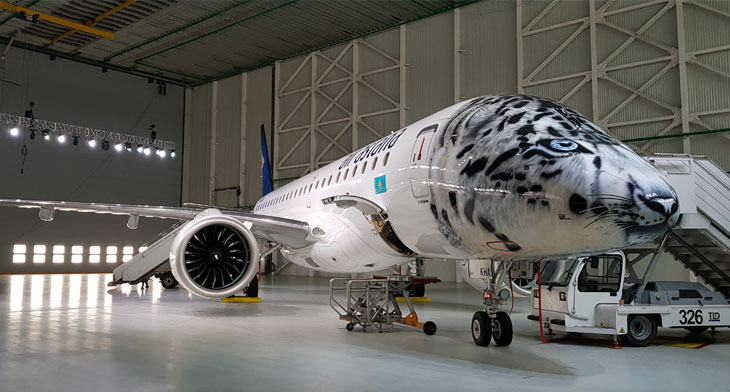 As many of us approach the Christmas period with plans to give and (hopefully) receive gifts, it’s nice to see another bright star rising in the East at this time.

There may not have been three wise men bearing gifts in snow-bound Kazakhstan at the unveiling of Air Astana’s baby, a brand new Embraer E190-E2, but the Brazilian aircraft manufacturer’s president and CEO, John Slattery, was more than happy to play the role of Santa Claus by handing over the first of five such presents to the airline’s CEO, Peter Foster.

Slattery described the delivery of the first E2 within Central Asia as a “momentous moment for us” and praised Foster and his management team for their development of the Kazakhstan airline into “a flag carrier of renowned respect that counts amongst its peers some of the biggest airlines in the world.”

Referencing the distinctive snow leopard-nosed livery on the first aircraft, he added: “It represents for us at Embraer the culture that you have developed here at Air Astana. The culture of giving – the culture of taking care of your passengers in many ways, and of taking care of the community. And of course it aligns perfectly with the new footprint, the new DNA of the new EJets.”

Since its formation in 2002, Foster (since joining as CEO in 2005) has indeed overseen the building of an impressive airline – a flag carrier that has made a profit every year, with no government funding required at any point along the journey following the initial set-up investment. It will again make a profit this year, he stated, despite the “very challenging” conditions faced by the industry in 2018.

The initial five new E2s, along with a number of Airbus A321LRs also expected over the course of the next two years, will help it further along its expansive path. A path that will also see it bring its nascent low-fare airline FlyArystan into being by May 2019, with the company having already gone to Airbus and Boeing with an RFP for an undisclosed number of A320neo and B737 MAX aircraft, which it wants to conclude by the end of Q1 2019.

Foster (pictured right) says the aircraft already ordered and the new ones to come will open up “significant possibilities” to serve destinations previously far beyond the reach of its current regional and mid-haul aircraft, . It was also reassuringly honest to hear an airline CEO accept that a new LCC subsidiary would be allowed to develop in isolation, even if “there will be some cannibalisation of Air Astana. But if we don’t allow it, it will leave a space for competition to grow into that market.” As he admitted himself, the country “has been an LCC-free zone for 16 years until now. But it’s inevitable that LCCs will come.”

Bearing in mind that only 5% of Kazakhstan’s 18 million people have flown at all, Air Astana’s evolution and new LCC will in due course be a present to all of them, enabling as it does the gift of flight – one that for many today remains a privilege rather than a right.

On that note, I’d like to take this opportunity to wish all our subscribers happy holidays, and a safe and prosperous 2019. The next LARA newsletter will be on 8th January, but you can still follow us online and on social media.