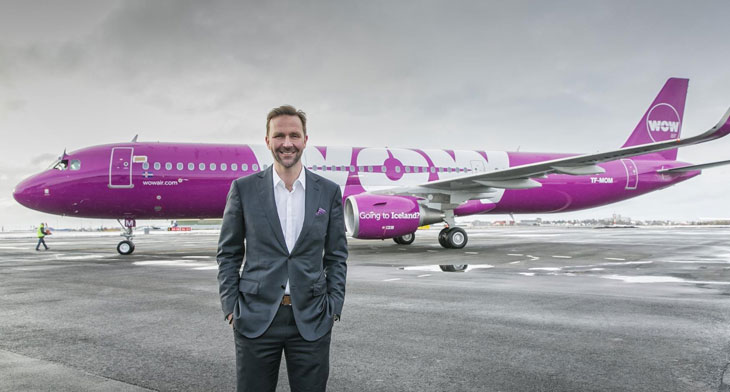 The news from the frozen north this week of the proposed all-share acquisition of Wow Air by its compatriot Icelandair Group came as something of a surprise, but it was a logical move by the two carriers to warm up their relationship.

It feels like a marriage of convenience for both, which have been admittedly starting to struggle financially as oil prices have risen, in combination with a fall in wider Icelandic tourism numbers. However, if the purported deal price of between US $18-$25 million for the acquisition is accurate, then Icelandair has still done some pretty good business.

Acquiring the pioneering low-fare carrier owned by entrepreneur and founder Skúli Mogensen (main picture), who created the airline in 2011 after selling his mobile software company Oz Communications to Nokia three years earlier for a tidy sum, will give Icelandair access to its innovative approach as well as a fuel-efficient fleet of just over 20 new-generation aircraft.

Initially to operate as separate brands, it will be interesting to see how they will create synergies and approach the challenging problem of ultra-tough transatlantic competition from other long-haul, low-fare airlines flying direct to the US from Europe. Code shares are likely, for a start.

I heard Skúli speak recently at the Aviation Festival in London about the strong market represented by Asia, and India in particular. It represents a significant opportunity for them, going forward, to counter the competition within Europe. Budget flights by Wow from New Delhi via Reykjavik to North America are due to start on 7 December, for example, using brand-new Airbus A330neos.

Iceland lies on the “shortest possible flight path between New Delhi and Boston,” he pointed out. “All the current connecting points are inferior from a flight path point of view, which means longer flight times, more fuel burn, and so on.”

Adding that Wow would have a very competitive offering connecting India with North America, he continued: “We’re offering fares that are 75% to 80% less than what has been seen before. It’s going to be very interesting. And, by the way, 20% of all foreign students in North America are of Indian origin. That’s a massive market that is perfectly suited for us, going back and forth. So we will stimulate the market very significantly.”

Whether his optimism is well-placed or not remains to be seen – after all, as he admitted to the festival audience at the time, “I’m an accidental airline guy, with no experience of the airline legacy world.”

But he also went on to speak a fundamental industry truth in this sector – that “cost needs to be brutally monitored.” The future success of Wow and Icelandair, and the low-fare long-haul pioneers out there like Norwegian, Scoot, AirAsia X et al depends on it.