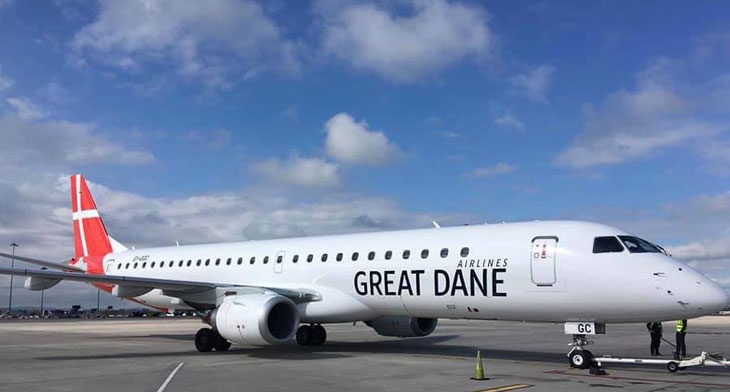 Edinburgh gets a Great Dane visit

Great Dane Airlines has launched a twice-weekly service from Aalborg to Edinburgh on 27 June. Flown by the airline’s 118-seat ERJ-195, the route to the Scottish capital is the only UK service operated by the airline and is the only service to Aalborg in the UK outside London.

Aalborg becomes the third Danish route offered from Scotland’s airport and joins Edinburgh’s existing services to Copenhagen and Billund. With the addition of this new 508-mile sector, no other airport in Scotland serves more destinations in Denmark than Edinburgh.

“From Aalborg Airport’s point of view, Great Dane Airlines has located an unfulfilled market potential for both leisure and business traffic – in terms of a medium aircraft capacity, which match the demand for a direct route to Edinburgh,” states Aalborg Airport CEO Søren Svendsen. The carrier is based in Aalborg, and alongside its scheduled services it will also offer character flights from the Danish airport.

Great Danes founder and CEO, Thomas Hugo Møller said: “Today’s first flight to Edinburgh marks another step towards achieving our mission of bringing increased connectivity to Northern Jutland. The Danes love travelling to the UK, for its history, sport and culture which made the Scottish capital an obvious choice, along with Dublin and Nice, for our first scheduled services. Edinburgh also fits into our strategy of flying to popular destinations from Aalborg which have in the past been too thin to support profitable narrow body operations.”

The recent growth in capacity now means that Edinburgh offers over 3,400 weekly seats to the Nordic nation, with Great Dane joining easyJet, Norwegian, Ryanair and SAS, which already fly to Denmark from the airport.