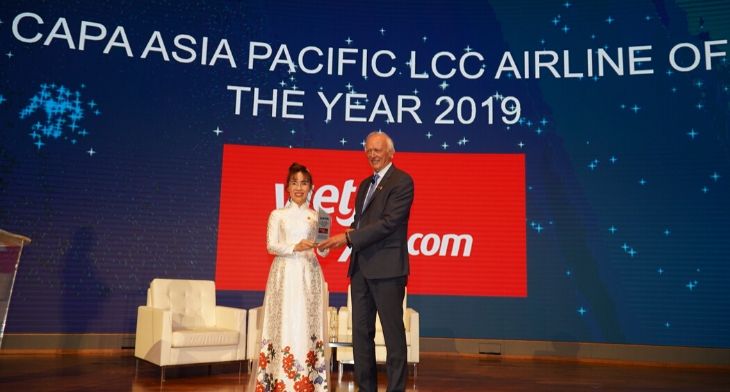 Vietjet has been awarded the title of “Asia Pacific Low Cost Airline of the Year” by the Centre for Asia Pacific Aviation (CAPA) during a ceremony at the CAPA Asia Aviation Summit, in Singapore.

The awards are intended to award an airline that has the best strategic vision, established itself as a leader in the market, the biggest innovator and has served as a benchmark for other operators to follow within the region.

The airline has undergone a significant expansion and the airline is now Vietnam’s leading domestic carrier and has strongly expanded its international work. This strategy has placed the airline in a position whereby given Vietnam’s favourable economic prospects and fast-growing market.

“Vietjet continues to break the mould for a traditional low-cost airline,” said CAPA chairman Emeritus Peter Harbison. “The company has a solid financial foundation and a game plan to formidably challenge some of the largest operators in Asia Pacific for decades to come.”

Vietjet president and CEO Nguyen Thi Phuong Thao said: “Vietjet’s mission is to make breakthrough changes in the aviation industry’s services. We are thankful for the trust, companionship and recognition from CAPA, the most renowned aviation organisation in the Asia Pacific. We are filled with happiness to have brought flying opportunities with cost-saving fares and friendly services on new and well-furbished aircraft to nearly 100 million passengers while creating positive values to the aviation industry’s community partners.”

Vietjet has been awarded the highest ranking for safety with seven stars in 2018 and 2019 by the world’s only safety and product rating website AirlineRatings.com and listed as one of the world’s 50 best airlines for healthy financing operations by Airfinance Journal in 2018 and 2019.