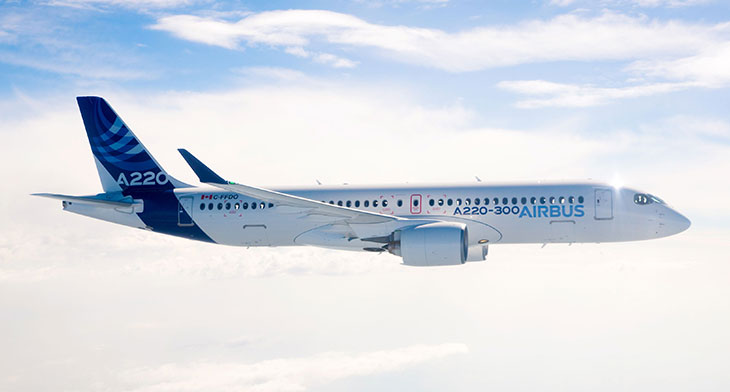 Airbus and the Canadian government of Quebec are now the two partners that hold sole ownership of the A220 airline programme after Bombardier transferred its final assets in Airbus Canada Limited Partnership (Airbus Canada). This marks Bombardier’s exit from the commercial aviation sector.

The Airbus group now owns a 75% stake in the A220 joint venture. The Quebec government is increasing its hold to 25% with any cash consideration being made.

A revised addition to the agreement is that Airbus now has an option to redeem Quebec’s holding in Airbus Canada in 2026, which is three years later than previously stated. Airbus’s Quebec-based subsidiary Stelia Aerospace has acquired work package capabilities for the A220 and A330 programmes from Bombardier’s operation in Saint Laurent, Quebec.

As from the end of January orders for the A220 stood at 685 units. Airbus said this represented a 64% increase since it became involved in the programme.

“I would like to sincerely thank Bombardier for the strong collaboration during our partnership,” said Airbus CEO Guillaume Faury. “We are committed to this fantastic aircraft program and we are aligned with the government of Quebec in our ambition to bring long-term visibility to the Quebec and Canadian aerospace industry.”

Airbus will pay Bombardier $591 million, net of adjustments, for the Canadian group’s holding in Airbus Canada. Of this amount, $531 million was paid at closing and a further $60 million will be due by the end of 2021. The agreement also covers the cancellation of Bombardier warrants owned by Airbus, as well as releasing Bombardier from its future funding capital requirement to Airbus Canada.