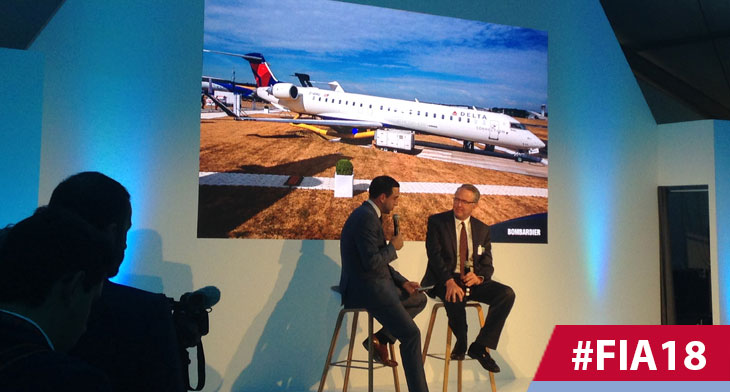 Fred Cromer, president of Bombardier Commercial Aircraft, said the signature cabin design “represents the latest innovation to our very successful regional jet programme.” He added: “This cabin design will add value to airlines, the feedback has already been very positive as demonstrated with the recent momentum we have gained in the market.” The new cabin design boasts larger overhead bins, which Bombardier says can accommodate the “largest number of standard roller bags of any aircraft in their category.” The larger economy class bins accommodate oversized bags that are 40% larger than the typical airline dimensions, allowing passengers to have more living space. The redesigned overhead bins and valence also provide an additional 4.5″ of shoulder space.

The cabin also features full LED lighting with mood lighting effects available, which can create airline-specific branding, and an increase in natural light due to larger windows –  “The largest windows in class” according to Bombardier.

Delta was announced as the launch operator of the ATMOSPHÈRE cabin for the CRJ Series regional jets when it signed a firm purchase agreement for 20 CRJ900s. Dan Pietrzak, managing director of Delta, described the ATMOSPHÈRE cabin as “the icing on the cake” of the aircraft, also citing the benefits of its fuel and maintenance efficiency.

He highlighted the bigger overhead bins in particular, adding that to be able to facilitate all the bags for passengers helps both the passengers and the turnaround times.

LARA took a tour of the new cabin and, according to Stephen Kalhok, Bombardier’s product marketing manager, the response has been “phenomenal”, adding: “Everyone is excited by the space.”

Echoing Pietrzak, Kalhok said the CRJ offers “the best economics in the regional market” with regards to fuel burn and on-time arrival but “the new cabin raises the level of experience for the passenger as well.”

Since the launch of the new cabin and its higher-density 90-seat Q400 turboprop, Bombardier says it has captured 42% of all orders in the 60-100 seat market segment. Kalhok continued: “Now people can see the finished product, I think the interest will be even higher.”

The CRJ900 is on static display at the airshow in Delta Air Lines livery.