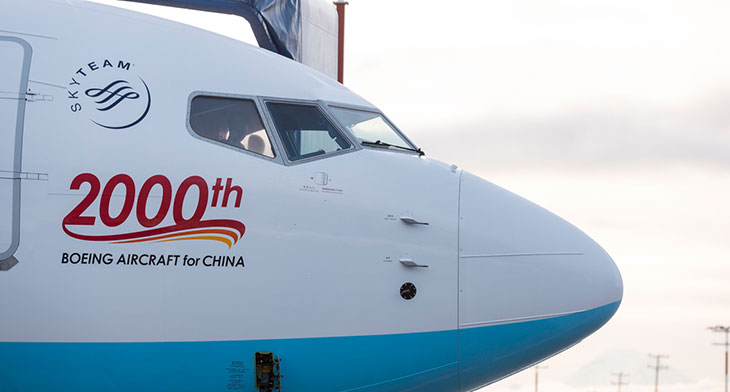 China’s Xiamen Airlines has taken delivery of its latest Boeing 737 MAX aircraft, with the US manufacturer flagging up the aircraft as the 2,000th to be handed over to a Chinese operator.

It also highlighted the increasing pace of growth in the country, which is now the world’s largest commercial aviation market. Boeing says it delivered its first 1,000 aircraft to Chinese airlines over four decades, but that the next 1,000 have been delivered in the past five years. One in four Boeing commercial jets goes to a Chinese operator, either through direct purchase or lease.

The B737 MAX delivered sported a special logo commemorating the milestone. It is the eighth MAX to join the operator’s all-Boeing fleet, the largest in the country with more than 200 jets.

“We’re pleased to be a part of this historic delivery for Boeing and China,” said Che Shanglun, chairman of Xiamen Airlines. “In our 34-year history of operations, Xiamen Airlines has steadily grown, doubling our fleet size over the past five years and achieving profits for 31 years in a row. Throughout that time, Boeing has been a valued partner in our growth and expansion by providing safe and reliable airplanes.”

The Chinese aerospace manufacturing industry supplies parts for every Boeing jet, including the 737 MAX, 777, and 787 Dreamliner, it added. This month the OEM and Commercial Aircraft Corp. of China (COMAC) are set to deliver the first 737 MAX from a completion and delivery centre in Zhoushan, China.